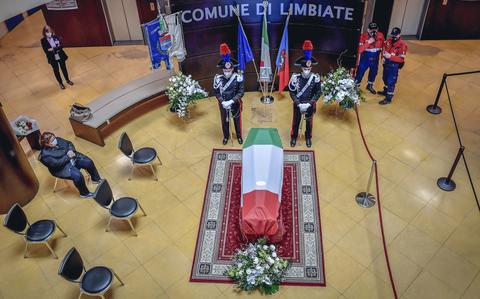 Carabinieri officers stand by the coffin of Italian ambassador to the Democratic Republic of Congo Luca Attanasio, near Milan, Italy, Feb. 26, 2021. Italy’s foreign ministry announced on Wednesday, Feb. 9, 2022, that it is seeking “maximum cooperation” from the World Food Program after Rome prosecutors indicated they would seek indictments against two U.N. employees in connection with the 2021 killing of Attanasio and two others. (Claudio Furlan/LaPresse via AP)

ROME — The World Food Program pledged continued cooperation Thursday with Rome prosecutors after they indicated they would seek indictments against two U.N. employees in connection with the 2021 killing of the Italian ambassador to Congo and two other people.

Prosecutors closed the investigation on Wednesday, saying they had gathered enough evidence to support a manslaughter indictment against the two. The Rome-based U.N. agency said it was reviewing the information. A judge must decide whether to indict.

Ambassador Luca Attanasio, Carabiniere paramilitary officer Vittorio Iacovacci and a WFP driver, Moustapha Milambo, were killed Feb. 22, 2021 in an apparent botched kidnapping attempt. They were attacked by gunmen as their convoy was traveling from Goma to Rutshuru, in eastern Congo, where the ambassador was to visit a WFP project feeding students at a school.

Italy formally asked the United Nations for an inquiry into what happened amid questions about whether the U.N. security arrangements were sufficient for the mission. The U.N. had said the road had been cleared for travel without security escorts or armored vehicles.

Rome prosecutors accused the two U.N. staffers of being negligent in organizing the convoy along a dangerous road and say they didn’t reveal that an ambassador would be travelling when they sought permission for the mission from the local U.N. security department, according to the LaPresse news agency, citing a statement from prosecutors.

LaPresse said the prosecutors’ broader investigation into those accused of actually killing the three men was continuing.

In a statement Wednesday, Italy’s Foreign Ministry said it “hopes for maximum cooperation by the WFP with the Italian judiciary to clarify every aspect of the tragic events of Feb. 22, 2021 and ensure that those responsible are brought to justice.”

The WFP said Thursday it had cooperated at every step in the investigation and would continue to do so.

The WFP “is currently reviewing information brought to its attention and related to the Italian authorities’ investigation,” said spokesman Greg Barrow, who noted that the agency had provided access to its staff in Congo and Italy as well as the findings of its own internal review.

“WFP will continue to support the relevant authorities with the aim of swiftly bringing the perpetrators of this heinous criminal act to justice,” he said in a statement.

Congolese authorities last month said they had arrested two men in connection with the killings, though the chief suspect, identified only as a man named Aspirant, remains at large.