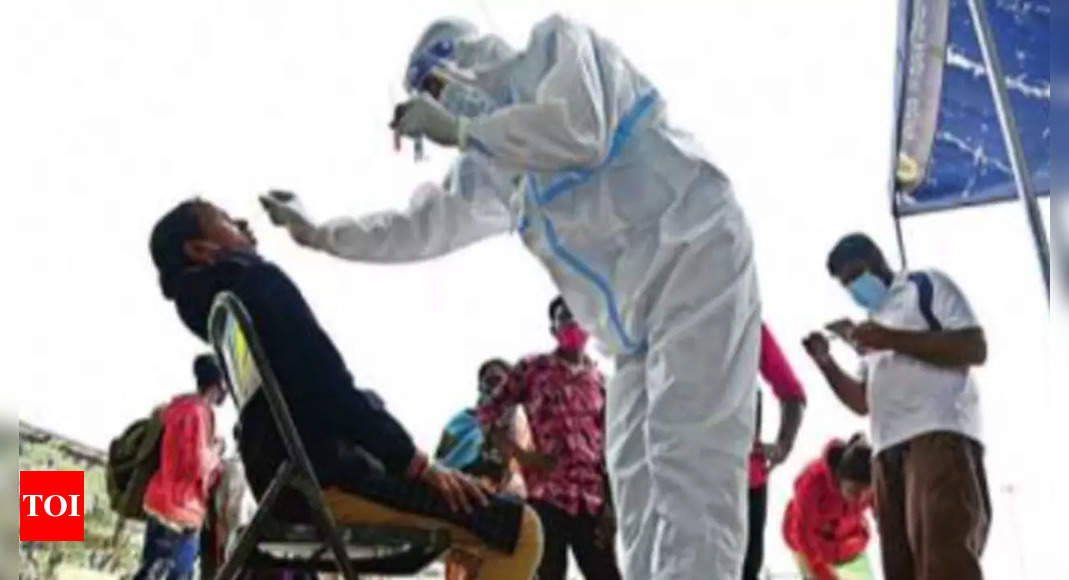 A health worker collects swab samples at a bus station in Bengaluru on Sunday, a day when 1.3 lakh tests were conducted

BENGALURU: With the gradual decline in Covid-19 cases in Maharashtra, the state’s Covid-19 Technical Advisory Committee (TAC) has suggested that the Karnataka government stop insisting on negative RT-PCR reports from travellers arriving in the state from Maharashtra. However, the government is yet to take a call on the issue.
The TAC also wants international travellers testing positive on arrival to be allowed to recover in home isolation if they are asymptomatic or mildly symptomatic. The government is yet to take a decision on this too.
“People travelling from Maharashtra to Karnataka are actually coming from a low burden state to one with a higher positivity rate. There is no point in asking passengers from Maharashtra to carry negative reports,” TAC sources said.
As on February 1, the test positivity rate in Maharashtra was 17. 2%, while for Mumbai it was less than 5% as against 13. 4% in Karnataka and 11. 6% in Bengaluru.
“When there is community spread and cases are declining everywhere gradually, there is no point in asking asymptomatic travellers from Maharashtra to undergo pre-boarding Covid-19 tests and carry negative reports,” said TAC sources.
The issue has been a pain point for travellers. Netizens on several social media forums have been demanding reasons why those travelling from Maharashtra must undergo Covid-19 tests when they are double vaccinated and have no symptoms.
Dheeraj Vyas (name changed) from Mumbai, a frequent traveller to Bengaluru, said the need to make a healthy person undergo a test when Covid-19 is everywhere is meaningless, especially since the virus has not respected state boundaries.
“I come from Mumbai where the positivity rate is less than 5% while the rate in Karnataka is more than 10%. Karnataka wants me to prove I am Covid negative before coming here. This is nothing but a way to conduct more tests. It’s not the right way to use resources,” Vyas said, explaining how many people have resorted to editing previous reports to circumvent the mandate.
The matter of relaxing restrictions for those coming from Maharashtra was discussed at a recent TAC meeting and was followed by a meeting with health department brass.
“The pandemic situation has been evolving and is dynamic. Some restrictions will also have to change as Covid-19 cases are declining,” admitted Dr CN Manjunath, a member of the state’s Clinical Experts Committee and nodal officer for Covid-19 testing.
Besides mandatory tests while entering the state from ‘high risk’ states, public resentment against other Covid-induced restrictions is also growing. For example, it has been more than two weeks since the TAC recommended that the government allow home isolation for asymptomatic or mildly symptomatic international travellers who test positive on arrival. However, the government is yet to take a decision on revising the norm.
Currently, asymptomatic international travellers who test positive on arrival have no choice but to stay in institutional isolation – mostly hotels linked to private hospitals. A half-decent room costs plenty and is a huge drain on personal finances.
“Mandatory institutional isolation was needed for international passengers in early December, when the fear of Omicron was beginning to rise,” a TAC member said. “The virus variant is in the community now. It’s time to allow home isolation for them if they have no symptoms or mild symptoms after thorough screening and triaging. ”
Responding to TOI’s queries, D Randeep, commissioner, health and family welfare department, revealed the issue was discussed at the last high level meeting and a considered decision was taken to continue with restrictions for people arriving from three states — Maharashtra, Kerala and Goa. “Once active cases drop below 50K, we may take it up for consideration again,” said Randeep.
Asked about home isolation for asymptomatic international travellers, the commissioner said the government is considering the matter.