What to expect when travelling to the Galapagos Islands 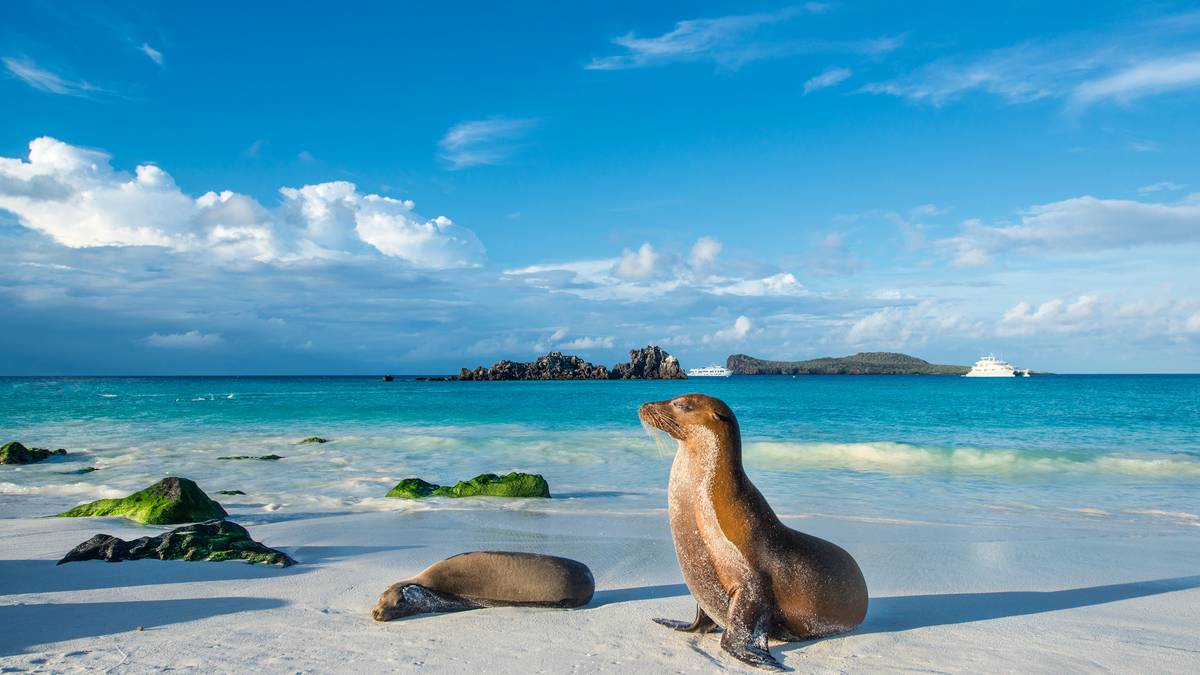 Sun tanning on the beach is an option, but you’d probably be sharing the cove with tuxedoed penguins and curious sea lions. Photo / Getty

As part of his wildlife watch series, Brett Atkinson shares some of his favourite animal encounters. This week he’s in the Galapagos, sidestepping languid sea lions and sneezing iguanas.

The food on board a La
Pinta small-ship cruise is great, but when whales are breaching on the near horizon, a Galapagos Islands breakfast of fresh fruit, croissants and coffee just has to wait.

Despite the occasional non-scheduled interruption by humpbacks, exploring the remote archipelago almost 1500km west of the South American mainland soon develops an irresistible routine. Days are arranged like an African safari, with morning and afternoon wildlife excursions from the 48-guest vessel bookended with food and wine, and underpinned and informed by guidance from authoritative naturalists.

Galapagos newbies quickly learn the local shorthand from La Pinta’s hardworking team. A “wet” landing could mean there’s a chance to swim with sea lions, penguins and shape-shifting shoals of fish, while a “dry” landing may segue to a twilight stroll across the islands’ volcanic landscapes. That’s when travellers often get the chance to spy juvenile albatrosses taking avian notes as their elder siblings launch themselves into a gusty equatorial dusk.

With smooth organisation by the boat’s crew, the special experiences come thick and fast. Just minutes after our cetacean-interrupted desayuno, it’s back into inflatable Zodiacs for a wet landing on Isla Bartolome. Working on your tan on the beach is an option, but you’d probably be sharing the cove with tuxedoed penguins and curious sea lions. Equipped with snorkelling gear, it’s better to encounter both species in their own environment. Penguins zip past in crystalline shallows, while shafts of light pierce indigo depths to reveal young sea lions twisting and turning like Cirque du Soleil performers. Soulful eyes make fleeting eye contact and then dart away leaving the residue of a shadowy underwater wake. Later in the morning, I negotiate a sea kayak around a secluded cove. A nursery of sea lions darts under my slowly gliding orange hull, emerging to toss fragments of seaweed in the air, while on the shoreline, a lone penguin drinks in equatorial sunshine before awkwardly negotiating the rocks to glide into the water.

Out of the water, the show is just as spectacular. After alighting on a makeshift landing place on Isla Fernandina, we’re forced to detour around a couple of sea lions lounging on the sandy path leading along the island’s rocky shoreline. The bold and totally unnerved duo is nothing compared to the display on a nearby beach. Scores of sea lions stretch out on an arc of white sand, and despite the megabytes of camera memory being expended in their honour, their behaviour remains untarnished by our presence. Pups continue to feed, older sea lions loll around in the warm water, and the most common response to the gathered human gallery seems to be a languid, stifled yawn.

Further along Fernandina’s windswept crags, it’s the turn of birds and reptiles to take centre stage. Blue-footed boobies – a close relation of the gannet – conduct courtship rituals just metres from a carefully prescribed track, and a lava terrace is slathered with hundreds of marine iguanas. The seemingly motionless reptiles lie beside, under, over, and even on the heads of their amphibious buddies. Like little dragons, the iguanas sneeze and snort to expel salt water from their bodies, leaving crusty white outcrops on their foreheads and nostrils. When Charles Darwin was in the Galapagos gaining inspiration for his theory of natural selection, he called them the “imps of darkness”, and Spanish sailors feared the expelled salt was venomous. Found only in the Galapagos, the marine iguana is actually quite harmless but still has the ability to conjure scary dreams.

It’s an irrational human fear that’s not reciprocated at all by the quirky reptiles. Like most species on the Galapagos, the iguanas simply do not possess a “fear gene”.

La Pinta’s head naturalist proffers one of his cut-to-the-chase explanations.

With a complete lack of large predators “in the Galapagos, the worst thing that can happen is an attack by a hawk”, he explains.

Since a hawk isn’t a threat to a robust iguana with a tough-as-old-boots exoskeleton, across the centuries the species has developed without any fear of predation.

Before visiting the islands, I’d heard that being on the Galapagos was like “walking as a ghost”, and it’s an excellent analogy. As you walk through the most

intense wildlife experience possible, visiting the Galapagos is akin to being a privileged phantom. It’s also a lesson in tolerance and respect, and a healthy injection of perspective for any traveller.

When to go: The Galapagos Islands can be visited year-round, but slightly cooler weather makes December to March the optimal time for wildlife watching and hiking.

Planning ahead: For expedition-style adventures exploring the Galapagos Islands on La Pinta or the Isabela II, visit World Journeys at worldjourneys.co.nz