The One That Got Away: Travelling in the Time of Covid 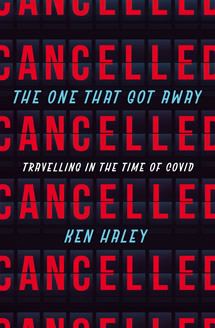 The saying about travel being the “only thing you buy that makes you richer” certainly holds true for Australia’s Walkley Award-winning journalist Ken Haley.

When most of us stayed at home in 2020 at the onset of COVID-19, Haley had an appealing schedule of travel destinations. Here is his distinctive (with photographs) and, at times, amusing account of unexpectedly travelling in North America, Cuba and the Caribbean during the pandemic.

Haley had his share of enjoyment in the year, but he also met his quota of hardships – from robbery and developing hurricanes to a no-longer-dormant volcano, then an acute health crisis that had him wondering whether he might have been wiser to buy a one-way ticket in advance.

His motivation? “…The impulse to see how closely reality matched the idyll of a carefree existence encapsulated in images of golden beaches and luxurious getaways indulged in mostly by well-off people.”

“As my 2020 unfolded, I would execute only two-thirds of my itinerary. After a stuttering start – transitions interrupted by the sudden collapse of air travel and closure of the region’s national frontiers – I had a golden run …” However, misfortunes accrued late in the year, that “cut my travels short. But not before I had enjoyed, and endured, the exhilaration of travel once again from a permanent perch aboard my self-accompanying vehicle, my wheelchair.”

“Looking back, I count it a stroke of luck to have departed Melbourne when I did: February 21, 2020. As things turned out, I was away exactly ten months. So, yes, I was fortunate to leave then. A month later on 21 March, I could not have done so without mounting unease. That is why I think of myself as the one who got away.”

What year did Ken Haley go travelling? If your answer is correct, you could be one of three winners to get a copy of the book. Entries should be sent to [email protected] by Monday, 28 February 2022. Names of the winners will be announced in Frank Cassidy’s PS-sssst…! column on 1 March 2022.