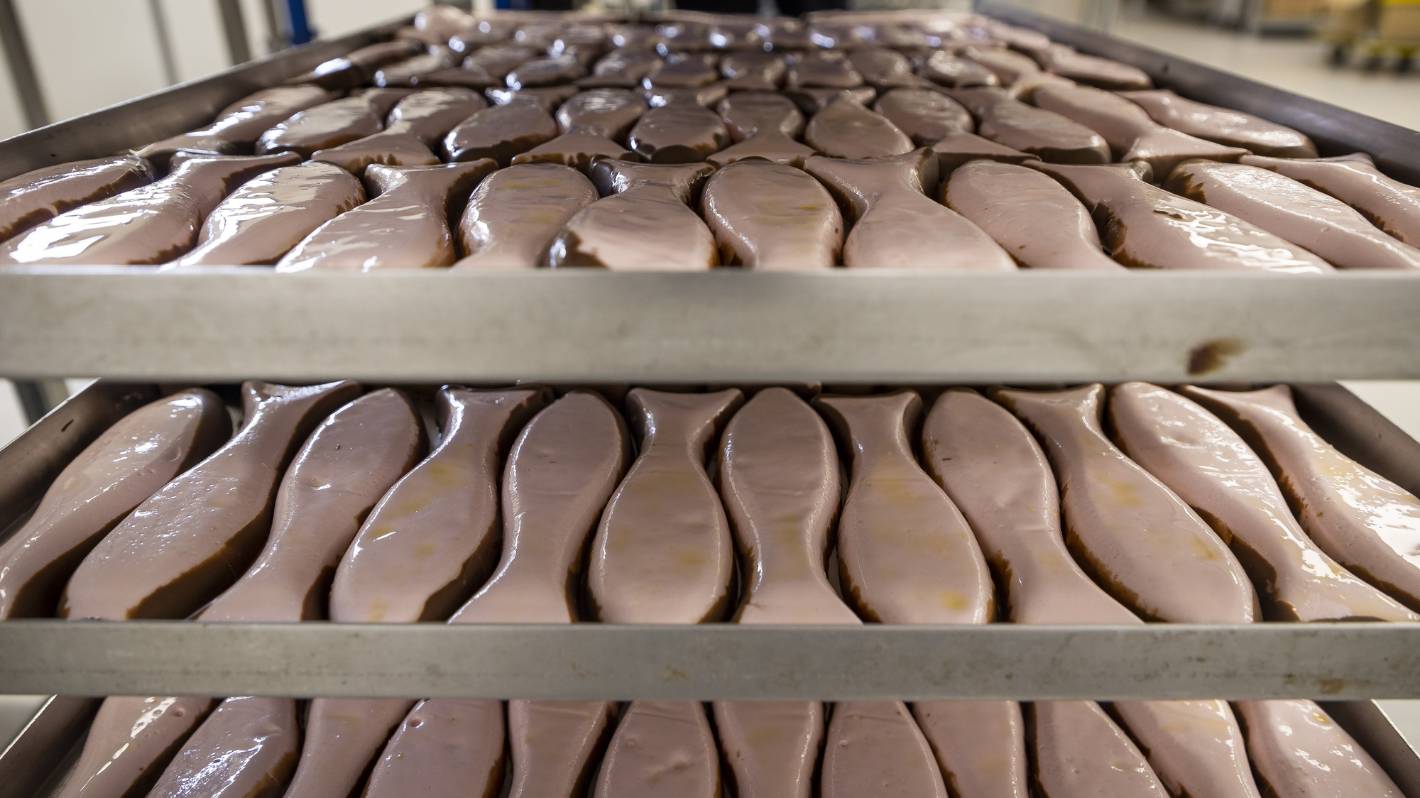 It takes three days to make a chocolate fish, but nearly a century to perfect the recipe.

In an unassuming Christchurch suburb full of kitchen showrooms, light industry and railways sidings, a small factory makes chocolate treats using a family recipe that is nearly a century old.

They are made by the Queen Anne Chocolates company, which was first set up in Christchurch by Ernest Adams in 1925 and operated until 1976.

READ MORE:
* Choc and awe: How to have a chocolate holiday
* This Easter no Cadbury chocolates will be Kiwi-made
* Yes, you can still find an egg-shaped marshmallow Easter egg

The partially coated chocolate fish are left to cool before a second coating.

“It feels really important to be looking after my grandfather’s legacy, particularly now we are nearly at the 100th anniversary,’’ she says in the Middleton factory.

“That’s a very special milestone, not just for me but for everybody who has been involved in Queen Anne.”

She remembers visiting her grandfather’s commercial bakery as a child.

“I remember walking around with my grandparents and being fed little morsels of cake.

“There is cake in my blood.”

On a typical Monday before Christmas, the factory was busy churning out school after school of chocolate fish.

The three-day journey to make a chocolate fish involves processes known as bottoming, enrobing and whisking.

It all begins with a mixture of water, gelatine and sugar getting whisked together with some colouring and flavouring. Then the marshmallow mixture is shaped into fish using a secret process.

“Marshmallow is a bit like sticky concrete. It is a wonderful texture, but really sticky.”

The next day, the marshmallow fish are sent through the bottoming machine, which coats the underside with shiny molten chocolate. Then they are fed down a long conveyor belt through a cooling tunnel to let the chocolate set.

A day later, they go through the final process, where molten chocolate is poured over them from above, coating them fully and completing the process. This part of the process is rather deliciously called enrobing.

Then the fish have what Sarah Adams calls “another day of rest”, before they are packed and sent off to the shops.

The marshmallow mix that fills each chocolate fish is made using a recipe first used in the 1920s by Sarah Adams’ grandfather.

When she revived the company in the 1990s, the first thing she did was track down the original recipes.

“I spent a year tracking them down. It was really challenging.”

She sought out a former Queen Anne factory manager called Vic Kent and placed an ad in Grey Power magazine calling for anyone who had old recipes.

“People starting writing to me and ringing me straight away.

“One person got in touch with the original recipe books from the 1920s.

“They were still slightly greasy because someone had been using them in the original factory.”

She had the first box of revived Queen Anne chocolates out within the year.

Over 20 years later, the business is still growing. They opened a new factory last year in the Christchurch suburb of Middleton.

“We were in another factory for about 11 years and splitting out of our seams.

“It was really compact. We have got room to grow here.”

What would her grandfather, who died when she was a teenager, think of what she has done with his company?