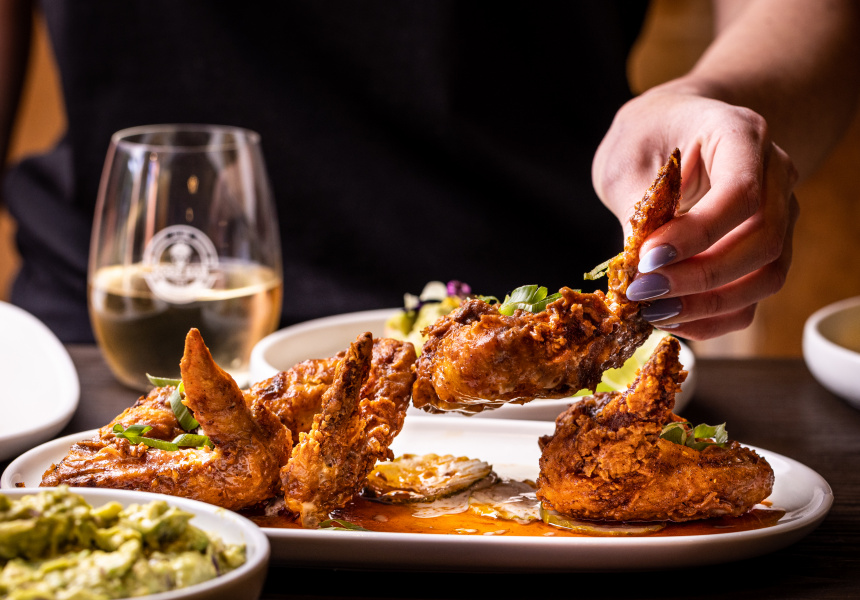 Dogs Bar wasn’t immune. In December 2020 the St Kilda live-music institution announced it would be shuttered due to lost revenue and a rental dispute.

“Dogs Bar was a very well-loved venue in the area,” says new co-owner Nic Cox. “A lot of people felt a real sense of ownership, and this place was like home for them.”

It’s in the spirit of keeping a piece of St Kilda history alive that Cox and business partner Rebecca Fahey took over ownership of Dogs Bar, reopening the venue in mid-December. While the interior is much the same, there’s a new kerbside deck and they’ve brought in chef Chris Weysham (Ding Dong Lounge), a New Orleans native, for a revamp of the food. Weysham’s menu takes Louisiana Cajun and Creole cuisine and blends it with his experiences living in San Diego and travelling the Mexican west coast.

“This being such a community bar and a very local spot made me want to write a menu that I would put in my community bar – which this happens to be, since I live down the street,” Weysham says. “I want people to get the idea that they’re coming to somebody’s house to have dinner.”

Weysham has geared much of the menu around drinks-friendly and handheld dishes. You’ll find a Mexican-influenced ceviche of barramundi, Western Australian scallops and prawns, tossed with plenty of lime juice and rice-wine vinegar, served with guac and a side of corn chips. There’s also a taco menu with wide-ranging influences. Take the jerk chicken taco: inspired by a college bandmate’s side hustle, it matches Scotch bonnet-spiced chicken thigh with a mango and prosecco salsa.

“You’d come out of a bar at 2am … and he had this little cart with a grill on it,” Weysham says. “He was always pumping reggae music, and for $5 you’d get a little thing of foil – it would have two pieces of jerk chicken, some bread and that’s it. It’s like your late-night drunk snack, right?”

Weysham’s pride, though, is the New Orleans po’ boy. Typical po’ boy bread is hard to find in Melbourne but Weysham eventually discovered a close analogue at Wendy Bakehouse, a Vietnamese bakery in Balaclava. He’s preparing shrimp and fried green tomato variations, but the beef po’ boy is king, with the meat braised in beer and beef stock for at least 12 hours.

Dogs Bar’s drinks menu has also had an upgrade. Independent local breweries such as Public Brewing Co and Kaiju now rule the beer selection, and wines are a tight mix of styles from Australia and further afield – a Schwarz GSM from the Barossa shares the list with a Luna Estate pinot noir from Martinborough, New Zealand, and a Baron Leopold sauvignon blanc from Bordeaux.

Not that live music is an afterthought. Over the coming months expect to see a mix of local indie rock, jazz, blues and quirky cover bands Friday through Sunday (with drag trivia and bingo during the week).

“I love that people have such a passion for the music that they’ve experienced in this place,” Cox says. “A true pleasure for us has been listening to the stories that people have had over the years of coming to Dogs Bar, and being able to reopen and provide an opportunity for people to come back in and have those types of experiences again has been really special for us.”