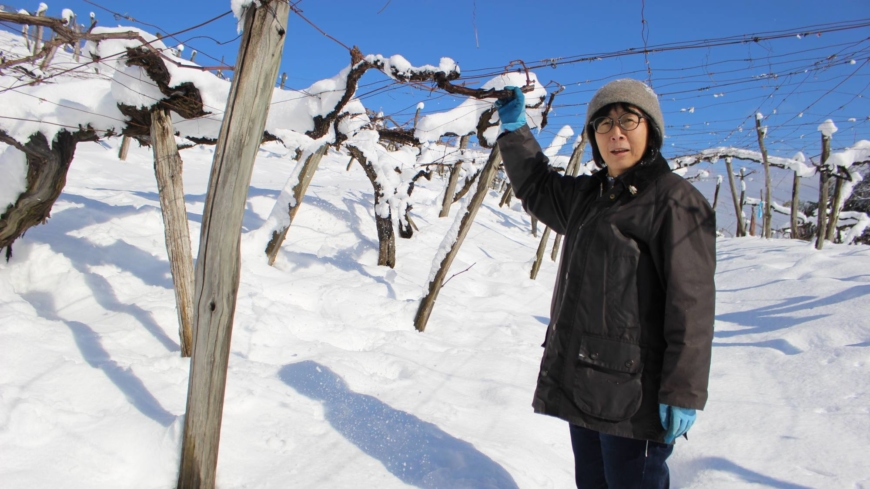 It was the 1990s and the young woman had recently returned from a four-year spell studying winemaking and training at vineyards in France, imbued with a conviction that old vines passed down through generations produce finer wine.

Shigenobu Takeda, head of the Takeda Winery, deep in Japan’s snow country, rejected his daughter’s impassioned appeal to save family vines planted in the 1920s. He saw an opportunity to replant the estate’s original vineyard with superior grapes.

Shigenobu didn’t mean any disrespect to the vieille vigne (old vine) traditions that Kishidaira came to admire in France. In fact, he was a pioneer of Japan’s wine transformation — one of the first to plant European varieties such as cabernet sauvignon, merlot and chardonnay — and had studied French wine methods carefully.

But vines that produce Muscat Bailey A? The indigenous grape variety that contributed to Japan’s reputation for cloying low quality wines? That was precisely the reason he wanted to “kicchae!” (chop down!) the vines that had grown up alongside him as a boy.

Where the father saw worthless old shrubs, the daughter saw a unique and irreplaceable treasure. Pitted against one another were two modernizers with a shared dream but different vision for lifting the Takeda Winery to greatness. It led to a heated argument.

“These vines have been renewing themselves since you were a schoolboy!” said the daughter. “Could you ever return to being a schoolboy?” Unusually, perhaps, the senior vintner staked the future on uprooting the past, while the younger one embraced the past to forge an exciting future.

Through a force of will now famous in Japan’s wine world, Kishidaira persuaded her father to back down. The old vines were saved. Now came the hard part. Proving that Muscat Bailey A could indeed produce wines capable of winning over the country’s discriminating oenophiles.

“These grapes have grown on our soil for more than a century, and I was determined to put them in the spotlight,” recalls Kishidaira. “But it meant I had to come up with a whole new way of growing and vinifying Muscat Bailey A.”

Trudging through snow up a hill of century-old vines, Kishidaira takes one of the gnarled and twisted branches in her hand and shakes off glistening powder.

“What I learned in France, as much as winemaking technique, was a philosophy,” she says, as if to the vine itself. “Winemakers who owned vieilles vignes, whose family had passed them down through generations, and protected them through war and disaster, had such a glow of pride. Then when I tried their wines, I learned just how much of a difference old vines can make to a wine’s depth and complexity.”

Kishidaira studied and trained in Burgundy and the Loire Valley during the 1990s. The natural wine movement was starting to gather force, led by producers such as Nicolas Joly and Marcel Lapierre. Regional identity movements, from Brittany in France to Friuli in Italy, were also gaining ground. Kishidaira was deeply influenced by both developments.

The longing among many Europeans for a return to roots found its own expression in winemaking. People began re-evaluating long snubbed local varieties, eroding the dominance of the cepages nobles (noble varieties) of pinot noir, cabernet sauvignon, merlot and chardonnay.

A new crop of winemakers rose to the challenge of creating outstanding wines from the grapes that grew in their backyard, such as ribolla gialla and malvasia in northeastern Italy, or tannat and mourvedre in southern France.

Caught up in the excitement of the times, Kishidaira was inspired to bring the vision back to Japan — along with a deep knowledge of natural winemaking techniques. Combined with a faith in old vines, this formed the backbone of her dream to achieve what many considered impossible: a standout Muscat Bailey A.

The trouble was that none of the methods for producing great French wines were of much use in crafting the great Muscat Bailey A. Four years in France had given Kishidaira a thorough education in the cardinal rules of winemaking, but when it came to specifics — such as heat regulation during fermentation — she was in open seas without a compass.

In the authoritative “Guide to Japan Wine and Wineries,” wine writer Miyuki Katori and vintner Toyoo Tamamura (of Villa D’Est winery) describe the Domaine Takeda Muscat Bailey A as “a graceful wine with depth and concentrated fruit, elegantly harmonized with a gentle acidity.” Kishidaira’s wines are today prized for their depth, complexity and long finish. The Muscat Bailey A is noted for its ability to pair well with strongly flavored meats such as lamb.

Kishidaira was lifted in her mission by camaraderie with a handful of other vintners, who were at the time also exploring the potential of Japan’s Muscat Bailey A. Chief among them were Bruce Gutlove, an American, today leading 10R in Hokkaido, and Yoshio Amamiya of Chanter Y.A in Yamanashi. They frequently met to exchange ideas and experiences about coaxing unique quality from Muscat Bailey A.

Still rare for Japan, Kishidaira’s wines are making their way overseas — featuring in European wine boutiques and on restaurant wine lists — notably in France where Kishidaira formed her wine philosophy.

In the Canal Saint-Martin district of Paris, restaurant Early June serves another Kishidaira wine made from a surprising Japanese grape variety. The Takeda Winery Sans Soufre is made from Delaware grapes — better known in Japan as a favorite summer snack.

“I was blown away when I first tasted this unique sparkling wine,” says Victor Vautier, sommelier at Early June, which he launched with partner Camille Machet. “The extremely fine bubbles are reminiscent of the best champagnes. And the supple aromatic profile of brioche and patisserie is so appealing.

“Our customers invariably say, ‘Wow — this is something I’ve never tasted before — and yet it still reminds me of France’s finest bubbly wines.’”