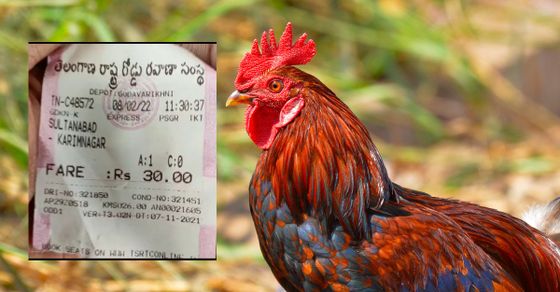 Karimnagar: In a bizarre incident reported from Telangana, a bus conductor charged a ticket fare of Rs 30 for a rooster for travelling in a state transport bus. The incident happened in the Karimnagar district on Tuesday.

Bus conductor G Tirupathi issued a ticket for the rooster at Sultanabad when he noticed that a passenger, identified as Mohammed Ali, was hiding a rooster in a cloth.

The conductor asked Ali to pay Rs 30 after telling him that all living things would be charged in the state buses.

The passenger initially resisted but had to pay for the rooster’s ticket.

A photo purported to be of the rooster’s bus ticket has been widely circulated on social media.

A video of the argument between the conductor and Mohammad Ali on whether the rooster can be treated as a passenger or not also went viral online.

Telangana State Road Transport Corporation (TSRTC) Godavarikhani depot manager V Venkatesham said that the conductor should have asked the passenger to get down the bus with the rooster as animals are not allowed in buses as per TSRTC rules.

He said that an explanation will be sought from the conductor for negligence and for violating the rules by issuing a ticket for the rooster.

“Near Godavarikhani, a passenger brought in a pandem kodi (rooster bred for a cockfight) in a basket. Along with the passenger, a ticket was given to the rooster as well. Usually, if a passenger brings along an animal on the bus, we charge them with a ticket too,” the conductor told The News Minute.