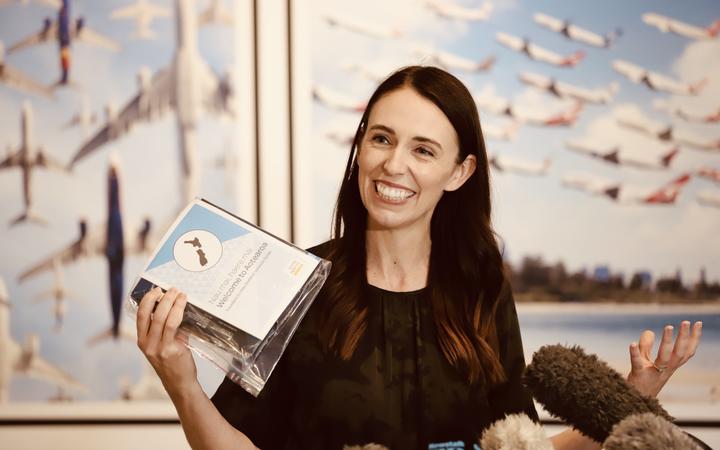 Prime Minister Jacinda Ardern says travellers coming into Auckland Airport will be issued with a pack including three rapid antigen tests, information and advice when the border reopens to some on Monday.

The second step – opening with the same criteria for travel from the rest of the world as well as working-holiday visas and skilled workers earning 1.5x the median wage – is set for two weeks later, on 13 March.

Ardern has this afternoon been touring Auckland Airport, and been briefed on readiness for the change.

She says the beginning of our reconnection plan is “extremely exciting”.

Travellers coming into New Zealand will find a familiar airport welcome but with some added extras “that will help us ensure that we’re doing everything to keep them safe and the community safe as well”, she says.

She says after they have collected their bags, they will be issued with a pack including three rapid antigen tests, information and advice.

She says the system is expected to change over time, however, and expert advice on whether self-isolation times can be further reduced is being sought.

She says the government has prioritised New Zealanders for being able to self-isolate over tourists and other foreign travellers because they are more likely to stay long term, and self-isolation is less likely to present as much of a barrier to them.

It’s important that people welcomed into New Zealand should feel safe and free to move, and too many cases being seeded into the community from the border would mean tourists not having that experience, she says.

“We do need to get that balance right.”

She says once we come through the Omicron outbreak we’ll have the opportunity to open up more widely.

She yesterday gave further assurances that restrictions within New Zealand would begin easing “well beyond” the Omicron outbreak’s peak, some three to six weeks away.

The government laid out the rules for self-isolating travellers last week, and criteria for allowing people to leave MIQ early were loosened.

Under the government’s plan, unvaccinated travellers would still be required to go into MIQ and some facilities will continue to house those unable to isolate at home, but the Defence Force would no longer secure the facilities.

Ardern has also signalled the government may no longer require self-isolation for vaccinated travellers in the “not too distant” future.

“But the scale is large, and it will grow.”

From Thursday, GPs will be using rapid antigen tests where they may previously have used PCR testing.

However, Ardern says if you have not been told to get a test, have no symptoms and are not a contact, you should not go seek a test.

“They are causing long lines,” she says.

“One of the major issues still continues to be people who are worried coming to be tested. I understand your anxiety, but please if you are not symptomatic or you are not a contact who needs to be tested, please do not attend our testing stations. It is standing in the way of people who need to be tested.”

She says there is flexibility in the system for teachers to return to school if they have been a contact but are not symptomatic, via rapid antigen testing and the test to return to work scheme.

A move to phase three is expected “fairly shortly”. That means more frequent use of rapid antigen testing and a further narrowing of the definition of who a contact is, she says.