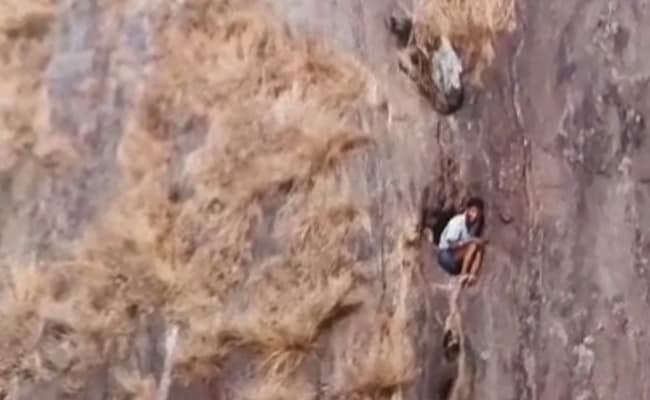 The man has been trapped on a hill between rocks since Monday.

Similar to the story of a 2010 biographical survival drama film, 127 hours, about a man trapped by a boulder in an isolated canyon, a young man in Malampuzha area of Palakkad in Kerala has been trapped on a hill between rocks since Monday with rescuers unable to reach him or provide him with food or water.

The difference between the film and the plight of Babu is that in the movie, which is based on real live events, there were no rescue attempts for the trapped person as no one knew where he was and he had to cut off his arm — which was trapped under a boulder — to free himself.

However, in Palakkad, several attempts, including one by a Coast Guard helicopter, have already been made to rescue the youth who is trapped on the hill side between rocks in the scorching heat with no water or food for more than a day.

According to a release issued by the Coast Guard, the helicopter pilot had decided to hover the aircraft near the ridge where the survivor was stranded, but due to “topography of terrain and various met conditions the helicopter was experiencing heavy downdraft” and therefore, the mission was aborted.

It further said that another rescue mission would be attempted on Wednesday morning.

Chief Minister Pinarayi Vijayan also intervened and sought the help of the Army to rescue the youth.

Subsequently, Lt General Arun of Army’s Southern Command informed the Chief Minister’s Office (CMO) that a specialised team will be starting from Bengaluru soon, a release from CMO said.

The team, which specialises in mountaineering and rescue, would be travelling by road as travel by helicopter at night being impossible, the CMO release said.

It also said that another team would leave for Palakkad from Wellington, in Tamil Nadu, in the evening to help with rescue efforts.

Besides the Army, the Air Force will also be joining the rescue efforts, the CMO release said and added that para commandos will be airlifted from Bengaluru to Sulur and from there they will reach Malampuzha by road.

TV visuals indicated that after the Coast Guard efforts failed, a National Disaster Response Force (NDRF) team was attempting to reach the youth who appears to be sitting in a small recess on the mountain face.

A member of one of the rescue teams told a media channel that while during the day the heat is scorching and unbearable, by evening and late night it becomes windy and cold and even wild animals would be roaming about which would all obstruct the rescue efforts.

The rescuer said that another team was on its way to rescue the youth.

According to locals, the youth, along with two others had on Monday decided to climb to the top of Cherad hill there, but the other two abandoned the effort halfway.

However, Babu continued to climb to the top, and after reaching there, slipped and fell and got trapped between rocks on the mountain face.

(Except for the headline, this story has not been edited by NDTV staff and is published from a syndicated feed.)