If you’re a Ukrainian travelling to Ireland, here’s what you need to know

This article can be read in Ukrainian here.

ON FRIDAY, IRELAND’S Department of Justice confirmed that visa requirements are being waived for Ukrainians who travel here.

The emergency measure will apply to all Ukrainians who arrive to Ireland.

If you are a Ukrainian coming to Ireland or considering travelling here, here’s what you need to know about the visa waiver and what your options are when you arrive in Ireland.

When did the visa waiver come into effect?

The waiving of visa requirements for Ukrainians came into effect immediately on Friday, 26 February when the decision was announced.

That means it now applies to any Ukrainian who arrives into Ireland.

The government has not indicated how long the waiving of visa requirements will last for or when it might end.

Who have visas been waived for?

Overall, whether the Department of Justice requires someone to have a visa to travel to Ireland depends on several factors – in particular, nationality.

The department has now added Ukraine to its list of non-visa required nationalities.

That means that a person of Ukrainian nationality does not currently need a visa to travel to Ireland.

Previously, a Ukrainian would have needed a visa for any stay in Ireland longer than 90 days.

If I am a Ukrainian arriving in Ireland, what are my options?

Currently, Ukrainians who travel to Ireland without a visa have 90 days after they arrive to regularise their status or to apply for asylum through the International Protection system

Additionally, the European Union is looking at implementing a residency scheme that would allow Ukrainians to stay in an EU member state for up to three years.

Let’s take a look at those options and what you need to know with the help of some experts – Rachael Bermingham, an Advice and Legal Information Officer for Doras, and Fiona Hurley, a spokesperson for Nasc, two non-governmental organisations supporting migrants in Ireland.

Applications through family members or work

For people who arrive in Ireland who do not choose to seek asylum, the choices depend on your individual circumstances.

Fiona Hurley said that the situation is “most clear for Ukrainians who have family members in Ireland”.

“They may be able to secure an immigration status based on family links, particularly where the family member in Ireland is an Irish or an EEA national. The Department of Justice have not announced any plans to put in place a special scheme for Ukrainian family members yet, however we would strongly encourage them to do so as it would provide certainty to this cohort.”

“There may also be the possibility of applying for employment permits, particularly for those who had worked for multinational companies with bases in both Ireland and Ukraine. This would allow for faster access to employment but it could limit family reunification rights.”

Rachael Bermingham of Doras said that those with EU family members living and working in Ireland may be able to avail of EU Treaty Rights permission to stay in Ireland.

Others with Irish spouses or family members may be able to acquire permission through these relationships, or secure work permits based on their qualifications and job offers.

“Our best advice is for individuals to make contact with an immigration NGO when they arrive to discuss their circumstances and see what may be the best option for them,” Bermingham said.

Another option for people who arrive into the country is to apply for asylum. In Ireland, this is called the International Protection system.

“Ukrainians will also have the option to make an application for international protection in Ireland. By doing so, they will be able to access accommodation in the direct provision system and a right to work after six months,” Hurley said.

When you enter Ireland, if you decide to apply for asylum, you can tell the immigration officer that you are seeking international protection or visit the International Protection Office in Dublin. 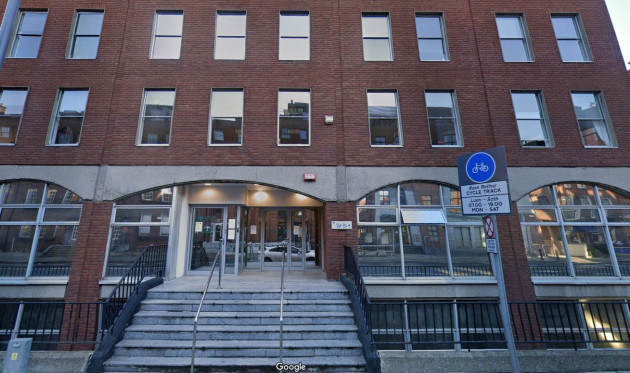 The building on Lower Mount Street

Even if you apply with an immigration officer at your port of entry, you will still need to make a formal application at the IPO.

The IPO will take a photograph of you and a copy of your fingerprints. If you have already claimed asylum in another country in the EU, it could decide to return you to that country.

If the IPO accepts your application, you can stay in Ireland while the application is processed.

The IPO will send you an International Protection Questionnaire that should be filled in within 20 working days from when you recieve it. It is advised that you seek legal advice to fill out the questionnaire.

You will undergo a second interview called the personal interview. There can be long waiting times for an appointment for this interview.

While you are waiting for your application to be processed, you can live in a Direct Provision centre. These are centres that provide accommodation and food. You would also receive an allowance every week of €38.80 for an adult and €29.80 for a child.

You will not be allowed to work or to open a business for at least the first eight months of your stay. If a decision has not been made on your application within eight months, you could then apply for permission to work.

If you have somewhere else to stay in Ireland and do not choose to stay in Direct Provision, you can still apply for asylum, but you will not have access to a medical card or weekly allowance.

“The EU has announced plans to introduce a temporary protection scheme for Ukrainians which would give Ukrainians residency rights for 3 years with the right to work and access social services,” Hurley outlined.

“This would be the first time that this Directive would be used in the EU. Ireland has a mirroring temporary protection mechanism in the International Protection Act, 2015,” she said.

“We would welcome the introduction of a temporary protection scheme in Ireland as it should provide for an expedited pathway to residence and mean that people are able to access employment and services at a much earlier date than if they were to apply for international protection.”

Bermingham said that it is “unclear if or when this would be enacted and what this might look like practically in Ireland”.

“We have seen the issues with the Afghan Admission Programme which denies recipients access to social welfare or child benefit payments,” she said.

“We would encourage the Irish government to be as broad as possible in any scheme that it creates as a restrictive residence permission may force people into the International Protection system.”

Where can I find more advice?

The Irish Government’s Department of Justice

The Ukrainian Embassy in Dublin

A non-governmental organisation that supports migrants and asylum seekers, such as: