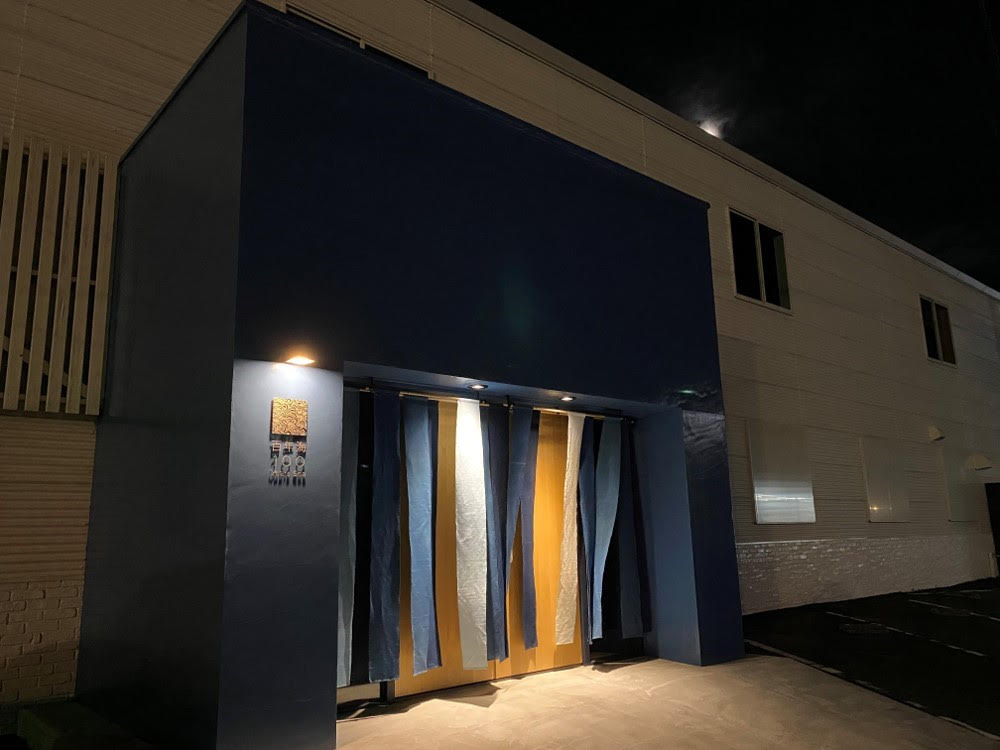 Having enjoyed several TeamLabo exhibitions and installations over the past few years, I was excited to learn this past summer that a new restaurant, Hyakunen Umi (100 Years Sea), was opening in founder Toshiyuki Inoko’s hometown of Tokushima City. The restaurant is designed to highlight some of Tokushima Prefecture’s most notable features such as indigo dyeing and its fresh fish and fruits. I finally got the chance to check it out in early October with a couple of friends.

Reservations are required via TableCheck. Information about the three omakase (chef’s choice) courses is sparse, but prices range from ¥7,000 per person for the ume (plum) course to ¥13,000 per guest for the matsu (pine) course.) In between, is the take (bamboo) course at ¥10,000? My friends and I decided to go with the plum course. I confirmed that none of us had food allergies and entered the necessary credit card information.

The entrance of 100 Years Sea with Noren commissioned from Buaisou. Photo: Suzanne Kamata

Tucked on a side street behind Tokushima’s prefectural office, the restaurant is centrally located and easy to find. Although my companions were coming by bicycle, I drove and was happy to find a parking spot right in front. Strips of blue and white cloth hung in front of the door, fluttering in the breeze like storm-tossed waves. The noren (cloth curtain at an entrance) was dyed by Buaisou, a collective of young indigo farmers and dyers based in Tokushima who has collaborated with the likes of fashion designers Tori Burch and Jimmy Choo.

I gripped the stone door knob (a nod to Tokushima’s famed Takagai stone masonry?), and went inside. Ambient music filled my ears and I was immediately immersed in the animated artwork that gives the establishment its name: roiling waves against a golden background projected onto the walls.

I was shown to my place at the side of a long table that stretched across the room, made a turn, and continued to the other side. A chef’s station, with a copper pot of sizzling oil, was at the center of this configuration. A server brought me a cup of locally produced bancha (a kind of green tea grown in Tokushima) in a pottery cup. My dinner companions arrived soon after and we were invited to look at the drink menu.

I opted for white tea and one friend ordered yuzu (a yellow citrus fruit grown in the prefecture) tea, while another of us ordered craft beer made in Kamikatsu, renowned as Tokushima’s “zero waste” town. Coca-Cola and Bierley’s orange drink made a somewhat incongruous appearance on the menu, but there was nothing made of sudachi (a small green citrus fruit) that is famously grown in Tokushima. 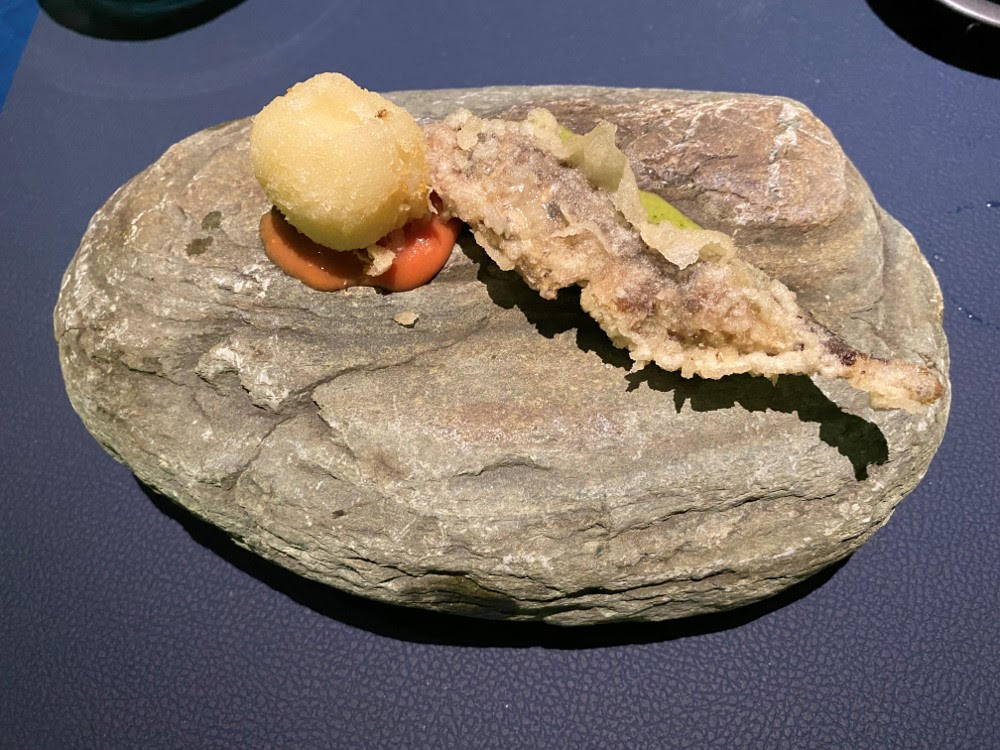 The first course was aji (Japanese horse mackerel) and a small potato, deep fried and served with basil sauce atop a stone. These morsels, and those in subsequent courses, were coated very lightly with batter and seasoned only with salt instead of dipping sauces.

This was followed by a soup of thin noodles swirling in a gazpacho accented with squid ink and lightly fried shiitake mushrooms, which were pleasantly juicy. Other dishes included an innovative take on chawan mushi (savory egg custard) in which the custard was surrounded by a sauce made of pureed porcini mushrooms, grated daikon, and yuzu. Although typically quite bland when prepared traditionally, Hyakunen Umi’s version is a little salty and rich in flavor oozed with what can only be called umami (a full and rich taste).

Bites of tempura-like fried, sweet potatoes were followed by a charcoal-colored plate bearing a summer roll (a spring roll wrapped in rice paper) made with sea bass topped with persimmon sauce, a mouthful of surprisingly tender wild boar, a chestnut simmered in brandy and celery sprouts tossed with chirimen (dried whitebait fish). 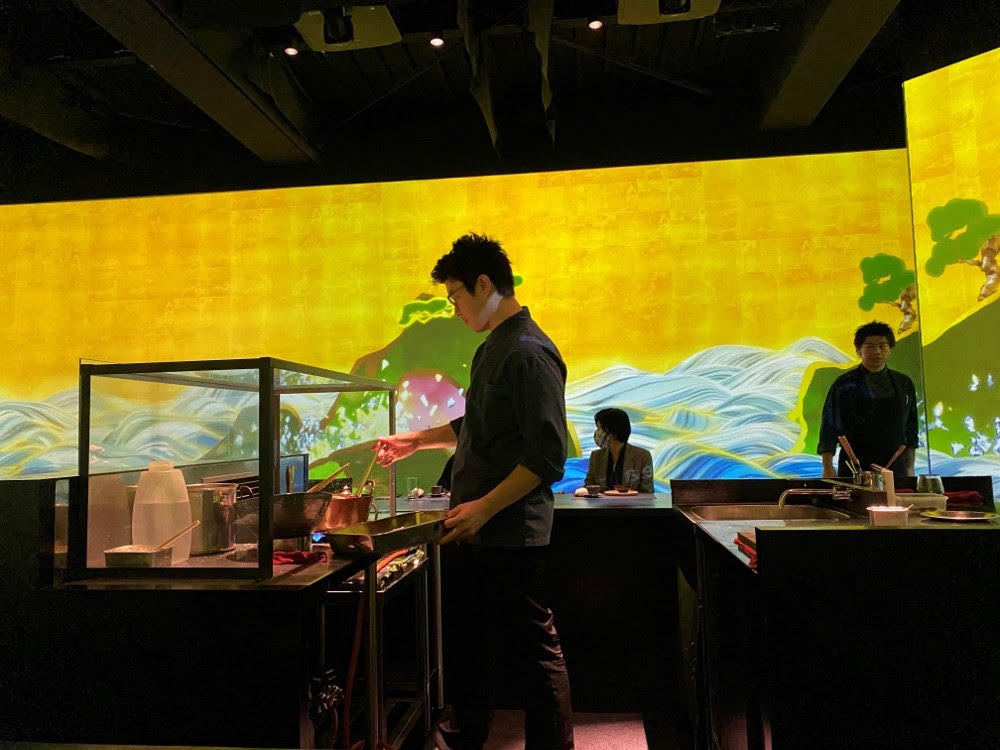 I eventually lost track of the number of courses, but I was pleasantly surprised by the tempura persimmon slices in sesame sauce. In between bites, I learned that Chef Kaito Arikawa was originally from Tokyo and that he had spent five years cooking in Paris.

For the most part, my companions and I were delighted by the exquisitely prepared dishes, however, we found the takikomi gohan (mixed rice) a bit underwhelming. Although presented attractively with wisps of nori (seaweed), glistening bits of boiled onion, and a cooked scallop at the center, the dish was unremarkable, tasting basically like plain rice and boiled onions.

One of my companions mused: “Perhaps if the onions had been caramelized?” (In the higher-priced courses, the rice is mixed with fish, which no doubt adds more flavor.)

One of my companions felt a bit motion sick from the constant motion of the waves in the animated artwork. Also, the pace of the meal was quite brisk, perhaps due to the fact that there were few other customers on this particular evening. At one point, the server swooped by to take away my soup, even though I hadn’t finished. 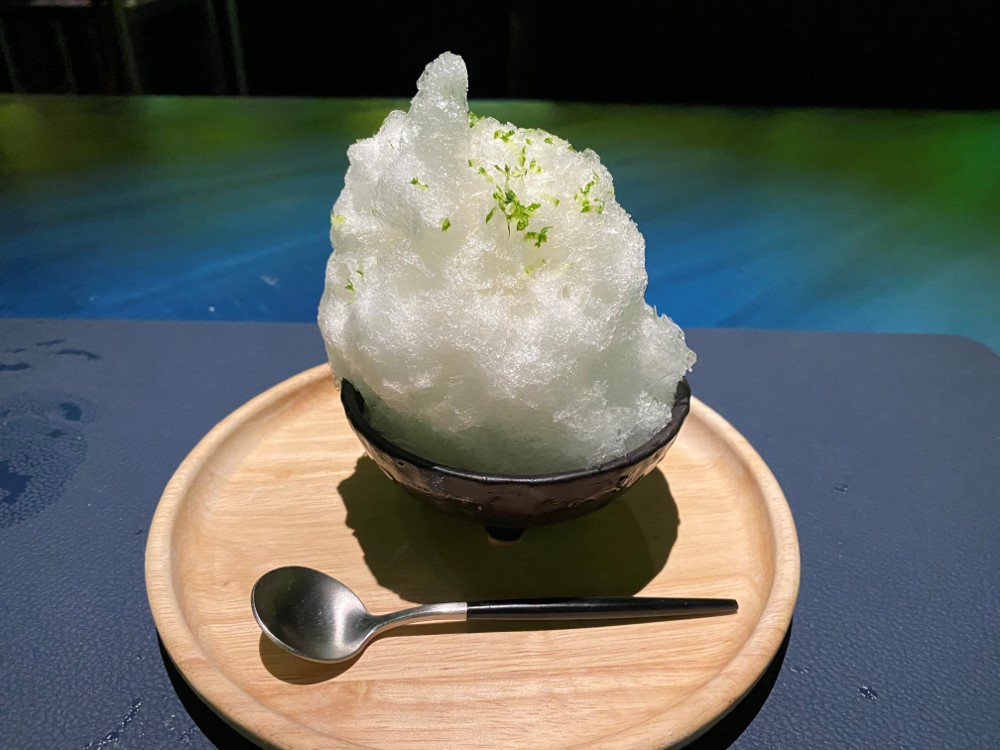 Dessert was a cloudlike concoction of shaved ice flavored with wasanbon (locally produced, fine-grain sugar) and sudachi rind, which was just the right ending to this fabulous meal.

Tokushima has a reputation for tasty ramen and chikuwa (fish paste pressed onto bamboo) but it has never been known for its fine dining. With Hyakunen Umi, visitors now have a chance to experience some of the best the prefecture has to offer in a dynamic 21st-century setting. All that’s missing is the Awa Odori (Awa Dance), the local traditional folk dance best seen in person.