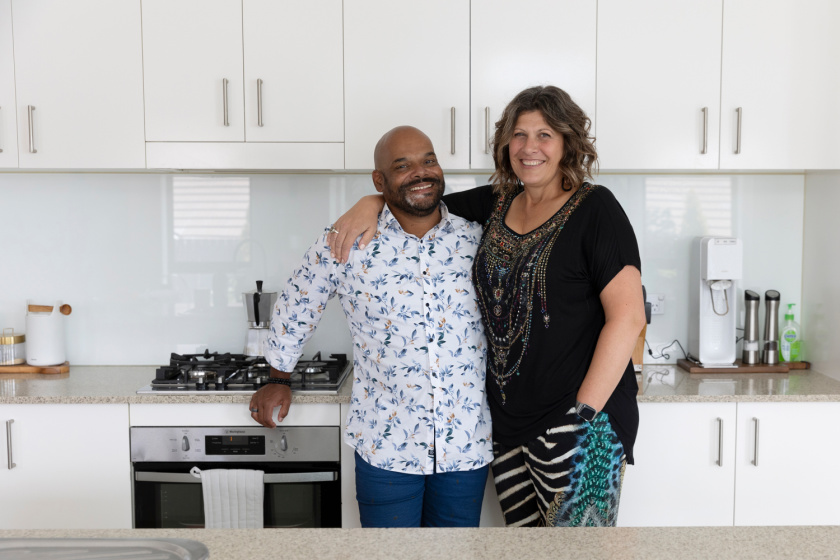 From a friendship struck up at a film festival to DJ-ing at their wedding, Ashley has known Jason and Adelina for some time. In this edition of Home Stories, he explores how their respective creative careers are reflected in their family home in Casey.

Could I start by stating that I really like this couple’s names? If I say them together, I get reminded of that classic French song Le Vie en Rose. This may seem irrelevant at first to a story about Adelina and Jason’s home in Casey, but let me explain.

I’ve known Jason for a long time. We first met when he was working on short film festival Tropfest and I was working for a sponsoring organisation. From there we kept connecting over the years at various Canberra events he was managing for what is now Events ACT. After he finished working there, we kept running into each other at various lounges until one day he asked me to DJ at his wedding. Perhaps those night-time meetings weren’t accidental and he was just following me around to check if I was good enough. If so, I must have passed the test.

It was at that wedding, somewhere between playing Brown Eyed Girl and September, that I met Adelina and quickly learned her passion for all things creative. The magic moment, however, was when I ran into them at White Rabbit Cocktail Room a year later and realised they had just achieved the milestone of getting a place to proudly call their own. I seized the moment and said ‘Look, I played your ABBA request at the wedding so the least you can do is let me write a Home Stories column about you in return.’ The guilt got them good and now we have a story.

Just like Jason’s professional life in events, Adelina also has a highly creative career—though with more travel and even more exciting back stories (sorry Jason). She started off as a graphic designer and worked in government publishing, before moving into the corporate and private sector and travelling around Europe, working for massive brands the likes of Adidas. The heights of Adelina’s career never got to her head, however, and she explains that she always kept grounded by keeping the love of drawing and art in her practice.

When Adelina returned to Canberra, she worked in ACT Tourism and that’s where the couple met. Years of friendship eventuated in years of marriage—and even a dodgy wedding DJ couldn’t disrupt the strength of their bond.

Adelina, Jason, daughter Ruby and their fluffy white cloud dog Bailey, first lived together in a family-owned home in Pearce that had two levels and more rooms than Kensington Palace. The couple always felt that this was too much and started to make plans in 2018 to sell the property and find something private, quaint and very them.

It just so happened that their current home in Casey was the first one they walked into. The place was open for inspection only because the real estate agent was practicing where to put the signs when they drove past. Making the most of this fluke, they walked in, saw the layout, the entertaining space and the backyard and knew this was it.

The couple always wanted a place where their friends could come over often to enjoy good food, good wine and good stories. The kitchen and dining layout give them plenty of space to play with, and as you can see, Adelina used that space wisely through the use of streamlined modern furniture complimented with strong accents of blue—especially in the artwork.

Jason and Adelina had always dreamt of having an outdoor spa, so in no time got busy designing an elevated deck that now houses a very generous swim spa. By the time it was done, those friends that came over for food, drinks and chats were now all doing all that immersed in bubbly heaven. The spa also doubles up as a plunge pool in summer so, as you can imagine, all their friends’ children are there too. Not that Jason and Adelina mind.

Speaking about the spa, note how the tinted glass positioned high on the edge of the deck creates privacy without killing the light and also creates an optical illusion that one is looking at a mountain range in fog.

Adelina says it’s been a slow but steady process.

“We used the opportunity when moving to buy new furniture and slowly build a look we felt comfortable with. We’re still on that journey two years since moving in.”

Clearly Adelina has brought a lifetime of world experiences to this home, pointing out “a bit of an English garden happening, a touch of Mexican influence in some of the bedrooms , and in the living, a Danish influence.” When I asked Jason where his Mauritian heritage influence is he just laughed and said, “The garage”.

I asked if the Death Star lamp in the lounge was his to which he answered, “No that came with the house and we have to replace it.” I quickly suggested a tropical cane pendant, at which he laughed again.

In fact, the couple constantly had smiles on their faces the entire time they were taking photographer Cass and I around their home, and it’s easy to see why. They have the space they wanted, the social experience that comes with a home built for entertaining and the intimate, quaint and private space they’ve always dreamt of. It’s like I said at the start, their vita is rosy.

Save your energy for styling and leave the rest to ActewAGL.

For a simple and seamless move, connect with Canberra’s local energy experts.

Home Stories is brought to you in partnership with ActewAGL.