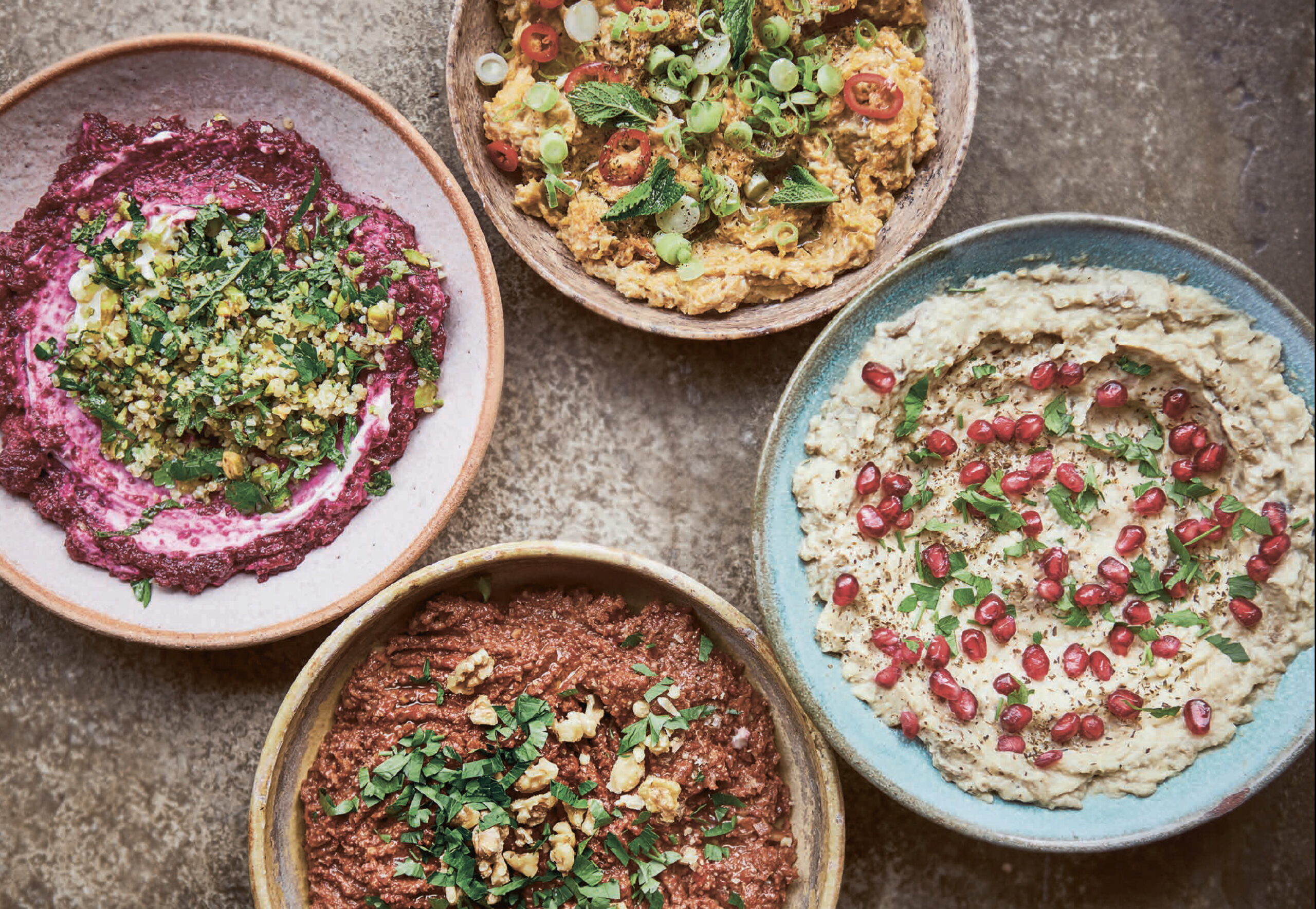 Ottolenghi: The Cookbook, Jerusalem and Ottolenghi Simple co-authors Sami Tamimi (also co-founder of Ottolenghi) and Tara Wigley come together again to create Falastin, a celebration of the recipes, stories and people of Palestinian – Sami’s homeland.

With wanderlust-inspiring photography and dishes from Bethlehem, East Jerusalem, Galilee and the West Bank, the book takes the home cook through regional styles through a mix of traditional and contemporary meals.

Some of these recipes have been handed down generation to generation, and many of them have been reworked or evolved in the Ottolenghi test kitchen, with that trademark Ottolenghi flair.

Musakhan is the hugely popular national dish of Palestine: growing up, Sami ate it once a week, pulling a piece of chicken and sandwiching it between a piece of pita or flatbread. It’s a dish to eat with your hands and with your friends, served from one pot or plate, for everyone to then tear at some of the

bread and spoon over the chicken and topping for themselves.

Traditionally, musakhan was made around the olive oil pressing season in October or November to celebrate (and gauge the quality of) the freshly pressed oil. The taboon bread would be cooked in a hot taboon oven (see page 341) lined with smooth round stones, to create small craters in the bread in which the meat juices, onion and olive oil all happily pool. It’s cooked year round nowadays, layered with shop-bought taboon or pita bread, and is a dish to suit all occasions: easy and comforting enough to be the perfect weeknight supper as it is, but also special enough to stand alongside other dishes at a feast.

Place the chicken in a large mixing bowl with 2 tablespoons of oil, 1 teaspoon of cumin, 1½ teaspoons of sumac, the cinnamon, allspice, 1 teaspoon of salt and a good grind of black pepper.

Mix well to combine, then spread out on a parchment-lined baking tray.

Roast until the chicken is cooked through. This will take about 30 minutes if starting with supremes and up to 45 minutes if

starting with the whole chicken, quartered.

Remove from the oven and set aside. Don’t discard any juices which have collected in the tray.

Meanwhile, put 2 tablespoons of oil into a large sauté pan, about 24cm, and place on a medium heat.

Add the pine nuts and cook for about 2–3 minutes, stirring constantly, until the nuts are golden brown.

Transfer to a bowl lined with kitchen paper (leaving the oil behind in the pan) and set aside.

Add the remaining 60ml of oil to the pan, along with the onions and ¾ teaspoon of salt.

Return to a medium heat for about 15 minutes, stirring from time to time, until the onions are completely soft and pale golden but not caramelised.

Add 2 tablespoons of sumac, the remaining 2 teaspoons of cumin and a grind of black pepper and mix through, until the onions are completely coated. Remove from the heat and set aside.

When ready to assemble the dish, set the oven to a grill setting and slice or tear the bread into quarters or sixths.

Place them under the grill for about 2–3 minutes, to crisp up, then arrange them on a large platter.

Top the bread with half the onions, followed by all the chicken and any chicken juices left in the tray.

Either keep each piece of chicken as it is or else roughly shred it as you plate up, into two or three large chunks.

Spoon the remaining onions over the top and sprinkle with the pine nuts, parsley, 1½ teaspoons of sumac and a final drizzle of olive oil.

Serve at once, with the yoghurt and a wedge of lemon alongside.

By Sami Tamimi and Tara Wigley

It includes 80 achievable sweet and savory pies, from sausage rolls, beef Wellington to rhubarb and custard tarts, as well as tips on how to nail making your own pasty at home.

A pretty meal of balanced flavours, with the tarragon lifting the earthiness of the carrots and onion and the balsamic providing a little acidity to counteract the sweetness. This tarte tatin can be served for either lunch or dinner. If you have a lot of people coming around, it also makes a knockout vegetarian side dish for a banquet. Be really quite careful flipping over the pan at the end of the cooking – remember to use a cloth on the handle as it will have just come out of the oven.

Place the carrot chunks and onion wedges in a large roasting tray, toss with the vegetable oil and salt then spread over the base of the tray.

Place the tray in the preheated oven and roast the vegetables for 30 minutes or until they start to colour. Add the hazelnuts to the tray and roast for a further 5 minutes.

In a heavy ovenproof frying pan, warm the butter, sugar and balsamic vinegar until the sugar has dissolved. Bring the mixture to the boil and continue cooking until it has thickened enough to coat the back of a spoon.

Add the roasted vegetables and nuts to the pan, toss well in the mixture and set aside to cool for 10 minutes.

On a lightly floured surface, roll out the pastry dough into a 1cm thick circle large enough to cover the frying pan.

Place the frying pan in the hot oven and bake the tarte tatin for 20 minutes or until the pastry is puffed up and golden.

Taking care to protect your hands with a heatproof cloth as the handle will be very hot, remove the pan from the oven. Place a large flat plate over the top of the pan and then quickly flip it over.

Dress the top of the tarte tatin with the iced tarragon leaves and serve while warm.

By Calum Franklin, Executive head chef at The Holborn Dining Room and author of The Pie Room

Cas Oh’s book is an indispensable A-Z guide to classic cocktails for bartenders and home enthusiasts which took five years to create.

The London bartender, who spent a decade behind the bar at The Club at The Ivy, wades through the endless variations of cocktails out there, to focus on 200 tipples.

For the die-hard cocktails makers who like to argue the toss about the correct way to make a drink, his recipes are backed by research and reasoning into methodology and trivia about drink origins.

The Hammer of God

A fortified beer cocktail invented in 2012 which pairs Innis & Gunn Original beer (aged in whiskey barrels with vanilla and toffee notes) with blended scotch, balanced with lemon and cinnamon syrup.


Pour Innis & Gunn about halfway in a chilled beer glass with a handle.

Shake the whisky, lemon and cinnamon syrup and pour straight into a mug (don’t fine strain) to create a frothy head.

Read on for the full list of Fortnum & Mason Food and Drink Awards 2021 winners and shortlisted entrants.

Drink Writer
Winner:  Will Hawkes for work in Pellicle Magazine and Tonic Magazine
Shortlist: Fiona Beckett for work in The Guardian Feast
Shortlist: Hamish Smith for work in CLASS Magazine