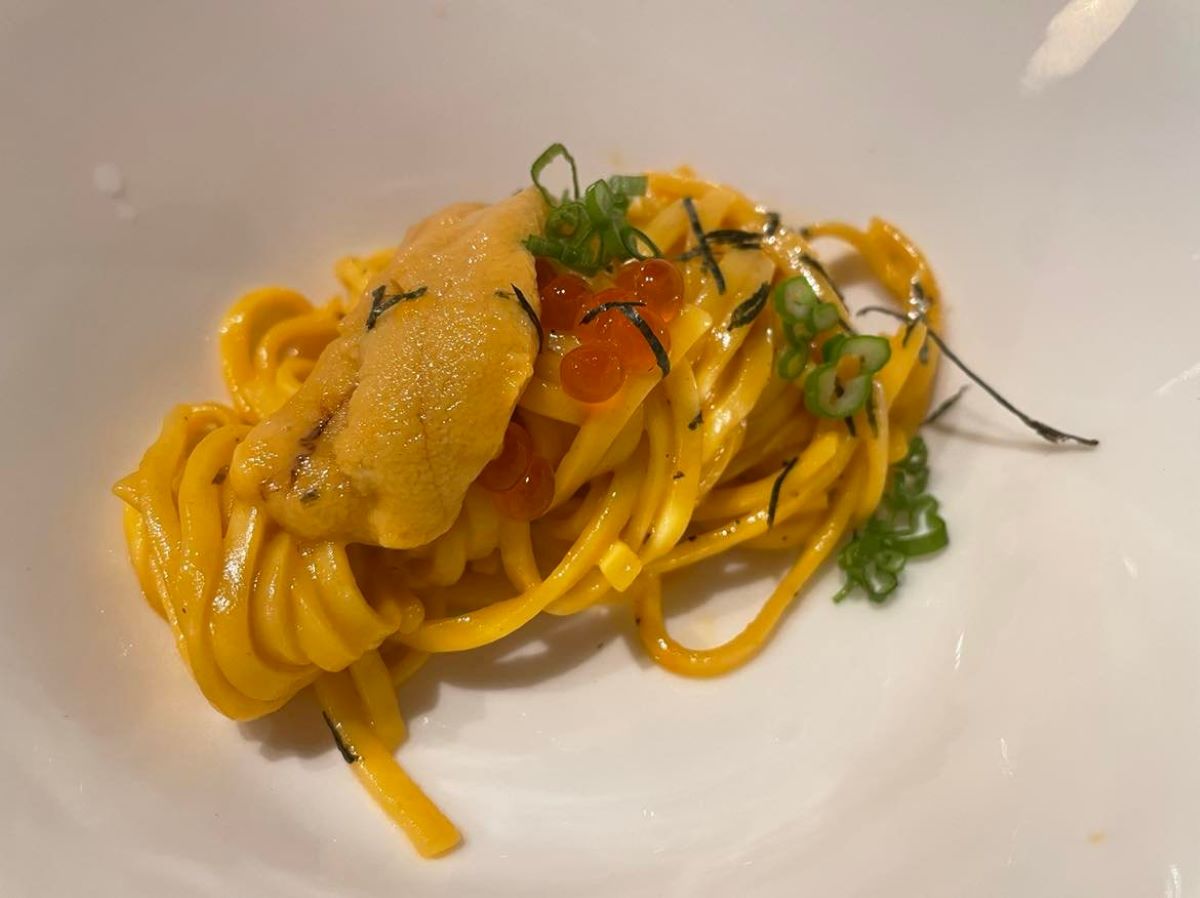 One timely piece of information led to a Houston chef opening not one, but two new restaurants in the Heights. “By chance, I learned about the [former] Golden Bagel location. I took a look at it, and it all made sense,” says chef Billy Kin. The recently shuttered bagel shop, located at 3119 White Oak, is now the home of Kinokawa, an omakase-focused restaurant and the forthcoming Tesseract, an izakaya-style eatery and whiskey lounge.

Kin worked in Houston restaurants for several years, and in 2018, he was the chef of Blackbird Izakaya, a casual Japanese diner that focused on using a binchō-tan (a dense type of charcoal) burning grill to cook a variety of skewered meats and vegetables. Blackbird also featured several other styles of Japanese cuisines, such as temaki sushi rolls, katsu curry, ramen and the occasional omakase, but it sadly closed in July 2020 during the first wave of the pandemic. When it opens, Tesseract will resurrect many favorites from the Blackbird Izakaya, with a focus on the bincho grill and sushi hand rolls.

Next, Kin partnered with restaurateur Tuan Tran to open Hidden Omakase. It served the type of omakase menus that Kin had previously created for his regulars at Blackbird. Kin’s stint helming Hidden Omakase was brief, and he eventually left it in the capable hands of chef Niki Vongthong. Under her leadership, Hidden Omakase was named one of Houston Food Finders’ best new restaurants of 2021.

“I kind of want to do my own thing, and it’s not that [Hidden Omakase] wasn’t for me, but when I do concepts, I like to really like the whole thing to revolve around a certain period of my life,” said Kin.

With Kinokawa and Tesseract, Kin is clearly using this opportunity to make something that is uniquely his own — even down to the design and decor. Days before opening Kinokawa, I spotted Kim painting the building’s outer walls. He even handcrafted most of the restaurant’s wooden furniture, such as the bar top and a large bookshelf. Kin also named Kinokawa after an upscale Japanese restaurant run by his father in Taiwan 30 years ago.

When it comes to the food, though, Kin is sharing the spotlight. He brought in another highly regarded Houston chef, Brandon Silva, to share his vision. Silva was the opening chef of Degust after spending five years with the Kirby Group, which operates Heights Bier Garden and Wooster’s Garden, among other establishments. Although Degust was his brainchild, Silva left after less than year due to creative differences.

“Food-wise for Kinokawa: you can call it omakase, or you can call it prix fixe,” Kin said. “It’s a set price for the chef’s choice that’s entirely centered around what I can get my hands on. That’s what we will serve to the guests. For the most part, about 90% of our ingredients will be sourced directly from Japan.” To accomplish that, Kin is relying on connections he developed during his run at Hidden Omakase. That’s increasingly important, because the supply chain issues have made that a difficult feat. “Now, I have a contact directly in Japan. Before the pandemic, we used to send our orders to local vendors, but since COVID, a lot of them stopped carrying it [seafood from Japan] because it would go bad fast, and wouldn’t sell in time,” he said.

I was invited to dinner at Kinokawa as a guest of the restaurant. During the meal, Silva said, “We are doing everything how we want it. Freestyle! Real omakase.” My fellow diners and I were treated to a meal based not only on what was available, but also on the whim of the chefs. Throughout dinner, the duo alternated between prepping and presenting dishes, giving each the opportunity to display their styles and personality. Kin plated a combination of favorites from past restaurants as well as classic omakase offerings, which still displayed unique elegance. Silva took the opportunity to push boundaries, and in some cases, created dishes on the fly.

From the onset of service, the chemistry between the chefs was apparent, and the duo created a coherent menu while utilizing their unique styles. Because Kinokawa provides omakase, dishes can vary from one dinner to the next. The night we visited, even the first and second seatings had different items. Our dinner opened with ceviche-style pasta neck clams (which are more tender and smaller than littlenecks) in a mildly spicy sauce — which is an unusual way to serve clams, since they generally require heat to open. Guests were then treated to two pieces of nigiri. The first was a slice of A5 Wagyu topped with flaked salt and lightly seared over binchō-tan. The other featured fresh Japanese uni, one of Kin’s signature ingredients. The chef was eager to share his considerable knowledge on the subject, even describing the differences between types of uni and what influences his choices. Uni would make another appearance later in the meal when Kin reprised a favorite from Blackbird Izakaya, Uni Carbonara.

Throughout the dinner, Kin and Silva served dishes ranging from the uncommon to daring. One less familiar but approachable dish was ankimo, or monkfish liver served like a pâté. It was mild in flavor and texture and served with seaweed and pickled cucumber. Another interesting plate featured both the shell and meat of a shrimp — both intended for eating. The meat from the shrimp was served ceviche-style next to its deep-fried exoskeleton, giving diners two ends of the texture spectrum.

Going full-tilt into the what-did-you say-I-just-ate? category, Kin served the last dish he developed before leaving Hidden Omakase: shirako, or potato starch-crusted, red snapper semen. It was served lightly fried and soaking in a type of tsuyu [sauce] similar to that served with agedashi tofu. The little swimmers were similar in texture and taste to tofu, but more custard-like (think fried cheese curds) and conveyed a distinct seafood aroma. While the flavor is inoffensive in every aspect, it was definitely a bold choice that might surprise some customers.

At one point in the night, Silva came out of the kitchen and excitedly exclaimed that he was “freestyling” this round. The result was a bowl of smoked trout roe and black trumpet mushrooms, topped with aged Parmesan cheese. It was an umami bomb, balanced by salt and the nuttiness of the cheese. A glance around the room showed diners finding creative ways to scoop the last bits from their bowls using only chopsticks.

Even though the restaurant just opened and is still developing, the team behind Kinokawa successfully put together a unique, fun and complete dining experience. The intimate setting worked well with Kin’s friendly demeanor, and he talked frequently with the guests. Silva’s energy was clearly on display. At some points, he could be seen dancing in the kitchen. Bolstered by their enthusiasm and the freedom to serve what they wanted, the chefs created a memorable evening.

For now, Kinokawa is open Thursday through Sunday, and reservations start at 6 p.m. are available on Resy. The price for dinner is $150 per person, and a $50 deposit is required. Kinokawa is currently BYOB and has no corkage fee. Tesseract will hopefully debut in in February, but the exact opening date will hinge on when the liquor license arrives.

Did you get value from this article? We rely on our readers and sponsors to cover expenses each month, such as writer and social media fees, administrative costs, web development, software, online services, website hosting and more. Can you chip in just $5 a month to keep our coverage going? (Not tax deductible.) Thanks in advance for supporting local journalism! To become a sponsoring business and advertise on Houston Food Finder, email us.