Festivals and food to forget the winter blues in Tohoku 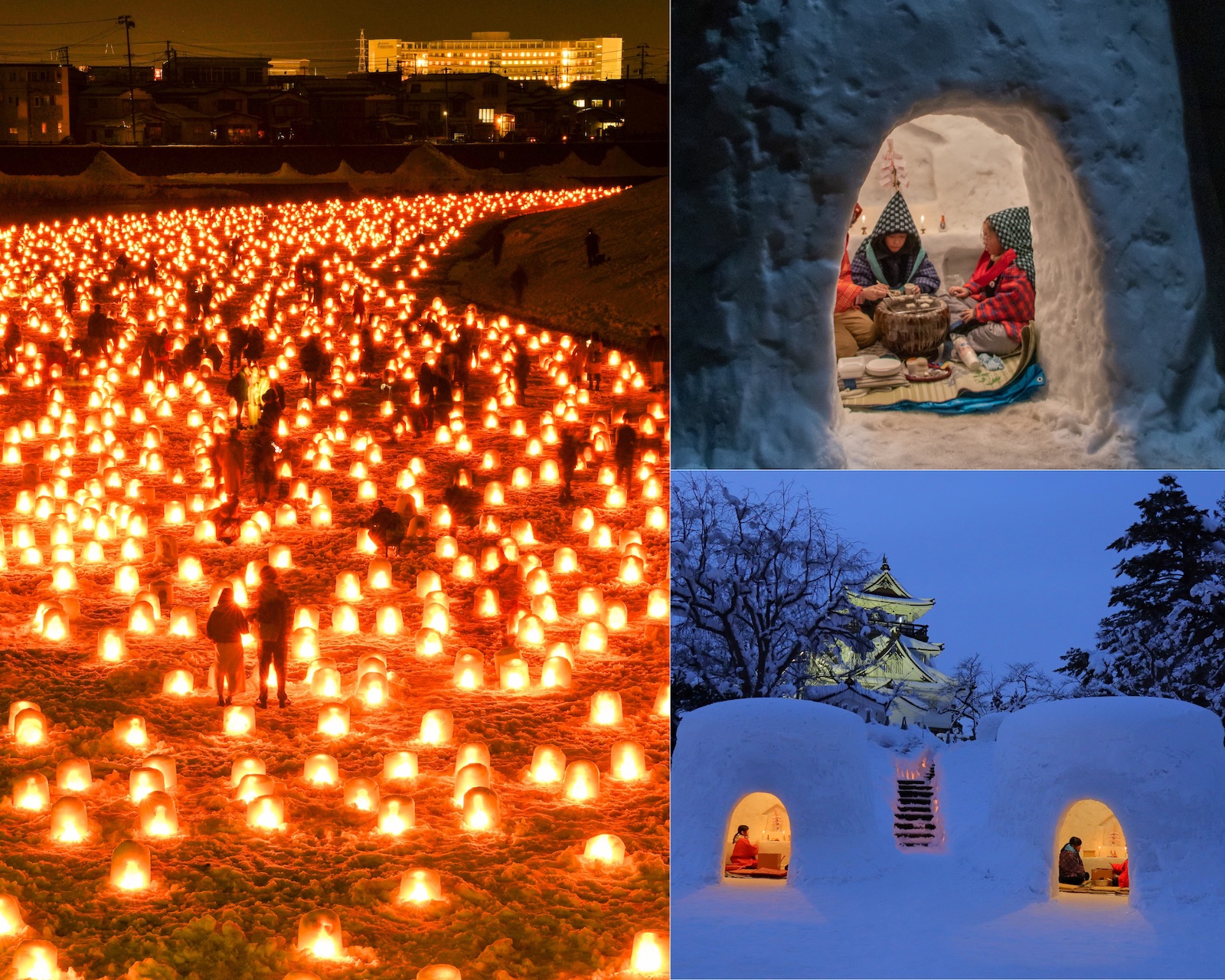 With much of the region covered in thick blankets of snow throughout the winter, people in Tohoku are experts in finding ways to enjoy the chilly winter season. From ancient folk festivals to tasty dishes that will stick to your ribs and warm you from the inside out, get some winter inspiration from the northernmost regions of mainland Japan.

The city of Yokote in Akita Prefecture has one of the heaviest snowfalls in Japan, and for over four centuries people have been using this to their advantage. The Yokote Kamakura Festival is held yearly on February 15 and 16, when the city is dotted with around 80 igloo-like, 3-meter-tall kamakura made from packed snow. This ancient folk festival goes back 450 years and is said to have originally been a ritual to offer gifts to a water deity at altars people built into snow huts, to pray for good harvests and the safety of their families.

However, these days it is a more secular event, attracting both locals and visitors who want to experience spending an evening in the kamakura, keeping nice and toasty thanks to a charcoal brazier and thick jackets and hoods. For children it is a magical experience, with snow huts glowing under the stars and a field along the Yokote River filled with over 3000 miniature kamakura lit up with candles to explore.

Stay overnight (make sure you are well bundled up!) and wander around the areas with most kamakura, such as Yokote Castle, the samurai residences, Yokoteminami Elementary School and near City Hall. Children will invite you into their kamakura to enjoy some amazake and grilled mochi, in exchange for a small offering to the water deity in the altar. If you are still hungry, be sure to try a warming plate of Yokote yakisoba topped with a sunny side up egg, perhaps with a side order of iburi gakko, Akita’s favorite smoked and pickled daikon radish, and a couple glasses of local sake.

Can’t visit during the festival season? No worries, at the Kamakurakan hall you can see a snow hut all year round, which is kept nice and cold in a -10 degree Celsius room.

If Yokote is not quite far north enough for you, then a train ride up to Hachinohe should do the trick. 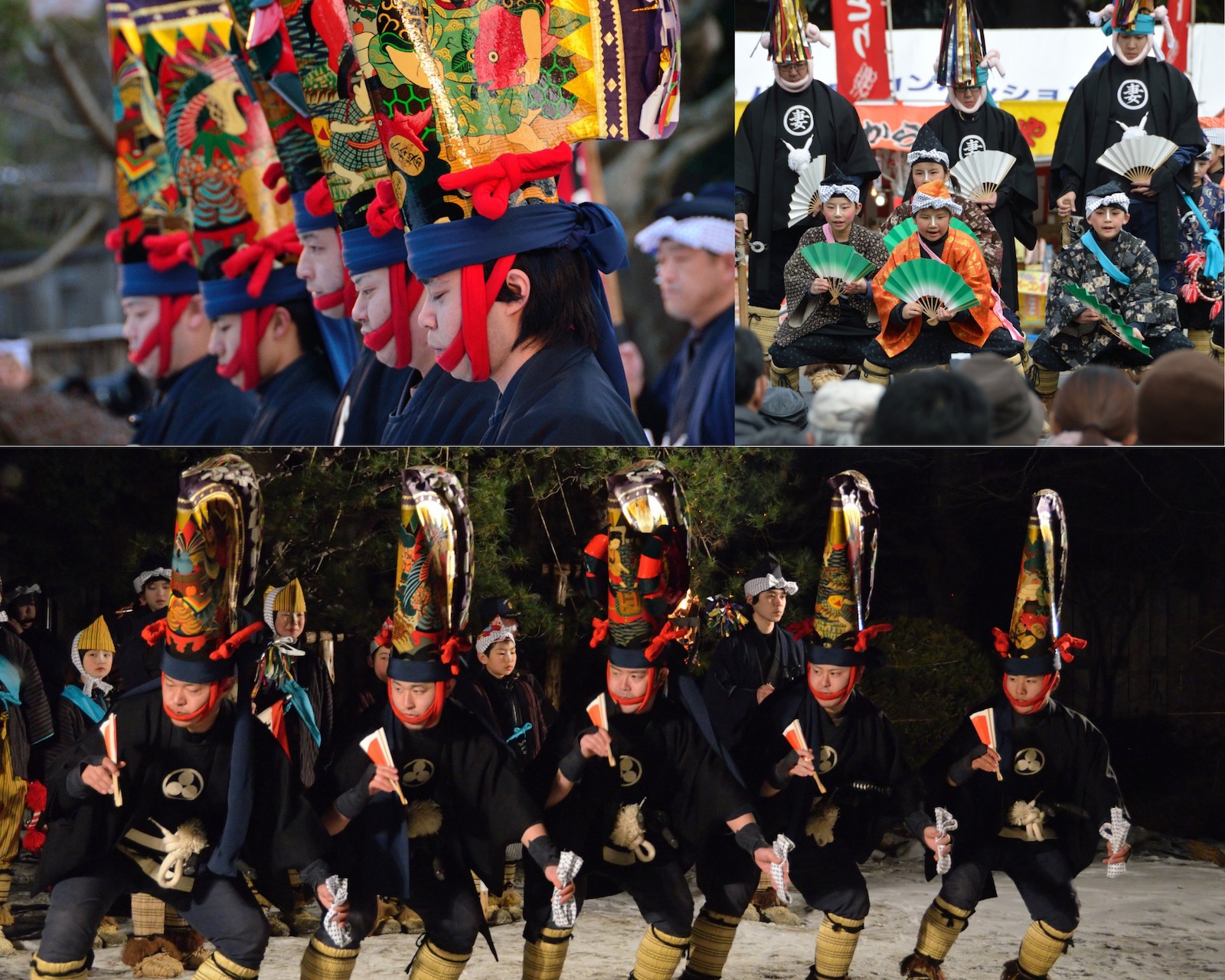 Located in snowy Aomori Prefecture, the city is home to the Hachinohe Enburi, a folk festival with over 800 years of history. This National Important Intangible Folk Cultural Property is held from February 17 to 20, when groups of dancers perform for the gods of the fields, to wake them up and ensure a good harvest in the upcoming year. There are a number of different dances you can watch, including some adorable performances by children dressed up in bright costumes. This year instead of public performances, the festival was streamed via YouTube on February 17.

But the fun in Hachinohe doesn’t stop after the dances end, thanks to the cozy atmosphere and friendly faces at Miroku Yokocho, a “food stall village” located right in the center of town.

Each of the 26-some stalls is quite small, with just a few seats and tables outdoors so you don’t have to worry about being in enclosed spaces. This is an ideal spot for an evening of bar-hopping, so you can try many local dishes, such as fresh seafood from nearby Hachinohe Port and senbei-jiru (a warming hot pot made with the famous local senbei crackers), or winter favorites like oden, crispy fried gyoza and grilled meats.

This charming little street is also lined with retro touches, such as old-school mailboxes and telegraph poles, which look particularly beautiful illuminated by the colorful chochin lanterns outside each tiny bar.

By the way, Hachinohe is the northernmost starting point of the Michinoku Coastal Trail, a 1000km hiking trail that goes all the way to Soma in Fukushima Prefecture. While we don’t recommend trying it in winter, during the rest of the year the Hachinohe section of the trail is truly scenic and beginner-friendly. Be sure to check out these articles for some autumn and summer adventure ideas as well!

Tempted to head up to the snowy lands of Tohoku this winter? Make sure you use the amazing JR Tohoku East Area Pass for 5 days of transport around the entire region for just 20,000 yen.