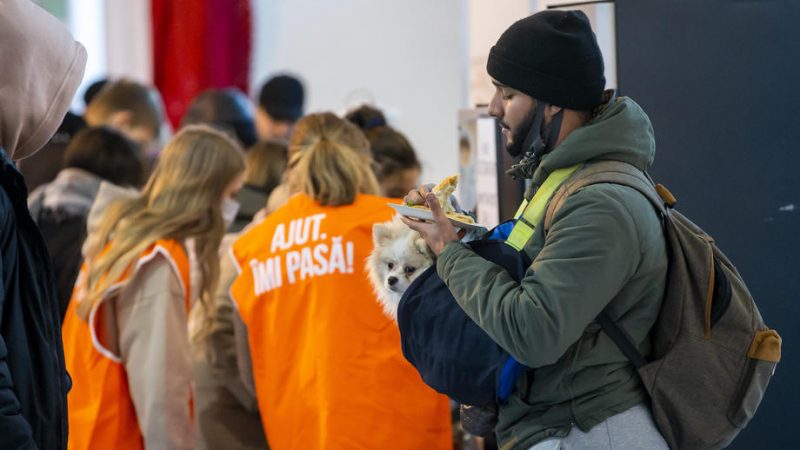 The European Commission has strongly advised member states to cut red tape for Ukrainian citizens fleeing from the war to safety in the EU with their pet animals, to give refugees “one less thing to worry about”.

The Russian invasion of Ukraine has spawned a humanitarian crisis at the EU’s borders with at least 150,000 people who have so far fled into Eastern Europe’s countries, according to the UN refugee agency (UNHCR).

Many of those fleeing are leaving their homes and their personal belonging behind but taking their animal friends with them. However, travel requirements for entering the EU territory with pet animals are quite strict, according to a 2013 regulation on the non-commercial movement of pet animals.

The requirements include an identification document or pet passport, duly completed with information on anti-rabies vaccination or on any preventive health measures for diseases or infections other than rabies.

Pets entering the EU from a third country also have to be marked while dogs, cats, ferrets also need to have undergone a rabies antibody titration test complying with the validity requirements set in the 2013 regulation.

On Friday (25 February), the EU’s veterinarians federation called on the EU to relax these entry requirements to let refugees take along their pets.

Some EU countries such as Poland and Slovakia have decided to make exemptions for pets travelling without the travelling requirements in the reception centres for Ukrainian refugees they have been established at the borders.

Announcing the opening of the national borders for all Ukrainians, Polish PM Mateusz Morawiecki said that the refugees are “welcome to bring their pets with them.”

In a letter to the EU ambassadors and national chief veterinary officers, obtained by EURACTIV, the director of crisis preparedness in food, animals and plants at the Commission’s DG Sante, Bernard Van Goethem, cleared up the situation regarding the EU’s entry rules for pets.

The EU official advised easing the process for non-commercial movement into the EU territory of pet animals “to avoid possible difficulties with refugees coming from Ukraine with their dogs, cats or other pet animals.”

He referred to Article 32 of the 2013 regulation, which allows a derogation in exceptional situations from the usual travel requirements.

“Member states may develop permit arrangements that would apply to pets travelling with refugees and authorise their entry without a prior individual application for a permit,” Van Goethem said in the note.

According to the Commission official, this communication would allow member states to inform their staff at borders to ensure awareness and therefore avoid any problems.

“We would also be grateful if you could inform the other member states of the measures taken,” Van Goethem concluded, giving his blessing to the approach adopted so far by Poland and Slovakia.

“Hopefully, this means Ukrainian refugees will have one less thing to worry about in these dark and difficult times,” the Commission’s health service DG SANTE tweeted on its official account.

NGOs and civil society organisations welcomed the Commission’s proposal, suggesting that this could set a compassionate precedent that could be replicated around the world during similar conflict situations.

“People should not have to jeopardise their own safety in efforts to prevent their animals from being left behind to fend for themselves,” said Ruud Tombrock, executive director for Europe’s office of Humane Society International (HSI).