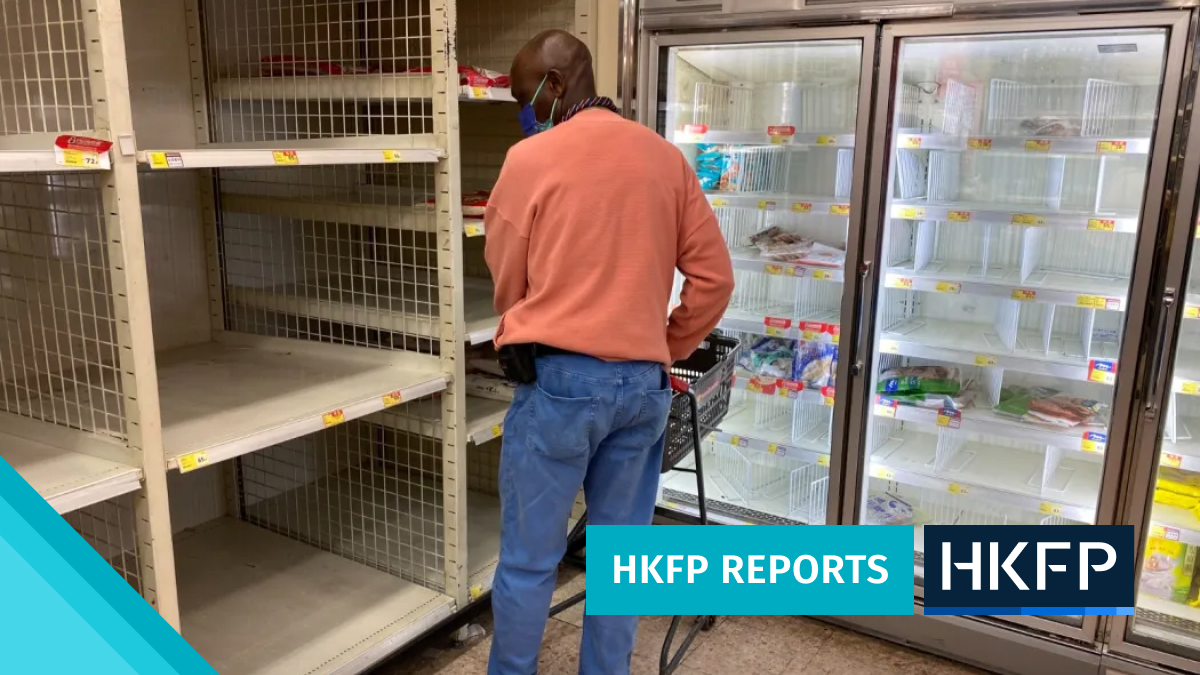 Mariam* has visited Hong Kong supermarket ParknShop three times this week for tomatoes, carrots and bread. The first time she went, she could not find anything she was looking for. The second time, there were tomatoes but they were too expensive, so she left empty-handed. When she went for the third time, at 3.20 p.m. on Wednesday, the supermarket was closed.

Mariam was not alone in being met with bare aisles this week, as Hongkongers panic bought amid the possibility of a citywide lockdown to contain the surging fifth wave of Covid-19. But unlike other Hongkongers, Mariam could not simply try another supermarket or a wet market. As a refugee, Mariam’s options are limited.

According to non-profit human rights organisation Justice Centre Hong Kong, there are roughly 14,000 refugees in the city. Considered illegal immigrants by the government, the community has no right to work and no earning capacity. “Always, we depend on begging,” Mariam said.

The International Social Service Hong Kong (ISS-HK), an NGO contracted by the Social Welfare Department (SWD) to provide humanitarian assistance to forced migrants, distributes a monthly HK$1,200 ParknShop e-voucher to each refugee, which works out at roughly HK$40 per day.

The ISS-HK also disperses cash allowances of HK$300 and from HK200 to HK$420 for utilities and transport, respectively. However, rising infections during the fifth wave have caused some disruption to their operations, and appointments to collect these cash handouts have been affected.

“The three offices of ISS-HK providing humanitarian assistance to the Non-Refoulement Claimants (NRCs) has all along remained open except during temporary closure for disinfection [usually lasting one or two days] after visits by persons confirmed COVID-19 positive,” said a spokesperson for the SWD.

In mid-February, Chief Executive Carrie Lam ruled out the possibility of a mainland China-style lockdown, telling reporters, “We have no plans whatsoever to impose a complete, wholesale lockdown.” But when Food and Health Secretary Sophia Chan, speaking on a radio show on Monday, said that a citywide lockdown was still being considered, residents were spooked into stocking up.

Fresh produce, bread and cleaning supplies flew off the shelves as freezers were emptied of frozen goods. Fears of food shortages translated into real-world supply issues, and Lam’s subsequent calls for calm appeared to do little to assuage a population perhaps shaken by weeks of inconsistent messaging.

“My plan was to do shopping two or three times a month, but there’s no way. [On Wednesday] I went to three places actually… but everywhere [was] empty, empty, empty.”

And while supermarket shelves are slowly being restocked, prices remain inflated. When several cross-border truck drivers responsible for Hong Kong’s daily deliveries of fresh vegetables were quarantined in early February, the city saw food prices soar and stay that way.

“The refugee community, they just can’t handle this,” Preston Cheung, Justice Centre’s senior advocacy and communications Officer, who is also a member of the Refugee Concern Network, told HKFP, adding that some “literally can’t put food on the table.”

According to the refugee-led non-profit organisation Refugee Union, food prices have doubled recently. Analysis by the Justice Centre found that the average price per kilogram for a Chinese lettuce had increased by 340 per cent, from HK$5.7 on January 14 to HK$24.9 on February 23.

Cheung said that NGOs were “trying their best to distribute food packs to the community,” but that there were fewer volunteers because of the virus.

“Even food banks these days, they’re not getting surplus anymore because everything’s cleared off the shelves in supermarkets,” Cheung said.

The SWD spokesperson told HKFP that ” ISS-HK has advised that there has been no report of difficulties lodged by [refugees], nor difficulties in sourcing food at the food outlets.”

Access to food is not the only issue refugees face in the fifth wave. Their ability to make mandatory visits to the Immigration Department has also been affected by the epidemic.

“[Refugees] are released with reconnaissance papers, which come with reporting conditions and other requirements,” Cheung said. If these requirements are not met, there is a risk of being placed in immigration detention, although he said that the Justice Centre had not heard of any such cases, yet.

The Immigration Department had shown lenience with sick or Covid-positive cases, telling them to report after they had recovered and with a doctor’s certificate. “We understand that it’s a reasonable administrative requirement because most companies would require it of staff as well,” Cheung said. “But a medical certificate is also something that is so hard to get these days. Private clinics are all fully booked up, not to mention about government clinics or A&E departments.”

The lack of cash to get around was a bigger hurdle still, Cheung said. “That transport allowance is paid for them to make such visits to the Immigration Department and to the ISS office, so that they can collect their monthly allowances and to report to the Immigration Department to renew their reconnaissance paper,” he said. “Without that cash allowance, they can’t be expected to do that.”

The SWD said that “ISS-HK’s provision of humanitarian assistance to NRCs has been operating non-stop,” with relevant contact numbers posted at the offices during temporary closures. However, Arthur said that he had been unable to get through to ISS-HK.

“To facilitate [refugees] to stay home and avoid travelling as well as to minimise the gathering of crowd at the offices to avoid infection, ISS-HK has been providing most services via phone/online, such as renewal of eligibility for assistance and provision of food, accommodation and utilities assistance, so that appointments for office interviews for needy cases can be minimised,” the SWD spokesperson said. “The appointments for issue of transportation allowance were staggered as well.”

As few refugees have bank accounts, Cheung said that in-person appointments were the only way for many of them to receive their allowances for utilities and transport.

‘Humanitarian crisis in the making’

In a statement released on Thursday, the Justice Centre warned of “a humanitarian crisis in the making” and called for “every kind-hearted Hong Kong citizen to consider donating Octopus cards with at least HK$500 inside to our organisation.” These, Cheung said, could be spent more widely than the ParknShop vouchers, with some wet markets even accepting the electronic payments. Stored value cards would also allow refugees to make it to essential immigration appointments.

“We support the Government to consider providing allowances through Octopus cards in such critical times,” the statement continued.

Refugee Union has launched a petition calling on the government to offer allowances through Octopus cards. We respectfully demand that Hong Kong Government recognize the physical and psychological harm caused to vulnerable refugee  families and urgently replace the ‘food cards’ with stored-value Octopus cards accepted by all groceries shops and at some stalls in wet markets,” reads the organisation’s appeal.

“When I see the government deciding [what] to offer to Hong Kong residents, I’m asking myself ‘Where am I? Who am I?’… we are not included in the relief packages,” Arthur said. “[The fifth wave] is a test of how humanitarian the community is.”

*Names have been changed to protect the identities of those interviewed.

LATEST ON COVID-19 IN HONG KONG