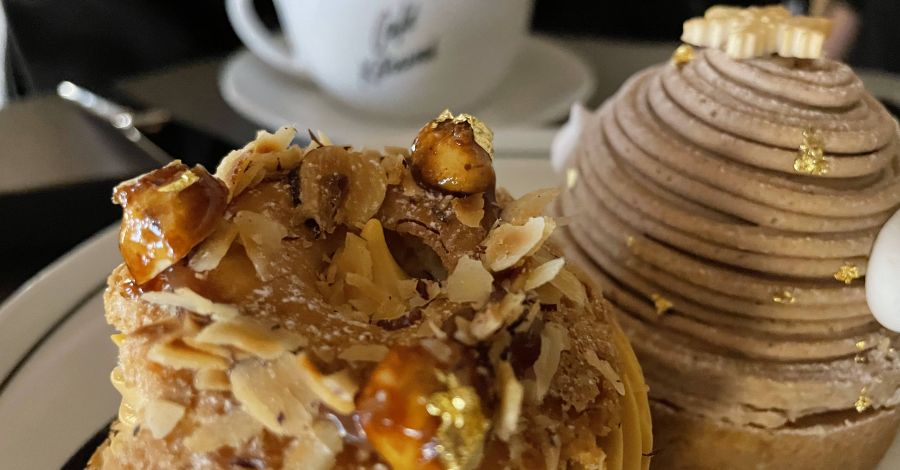 For today’s column I am going to run with the Japanese theme from last week but with a little twist. Instead of a full fledged restaurant like last week, I will be taking you to a café called Café Kitsuné. Café Kitsuné is a stylish spot in Belgravia that has quite the boutique feeling in the air, it’s around a 16-minute bus journey from Imperial College – so it’s perfect to attend if you have a few hours to spare in the afternoon by yourself or with some friends. The café serves a fusion of French & Japanese confectionery, coffee and cocktails and has its grass roots all the way back to Tokyo, Japan.

Café Kitsuné is one of the four café/restaurants available in the Pantechnicon venue which combines both Nordic and Japanese cultures together. It’s located on the first and second floor of the building. The first floor is mainly for ordering and paying, with a joint outdoor seating used by all establishments within the building. The first floor is also connected to Pantechnicon’s own store with the second floor for seating. The interior is also very chic and clean to suit the location it is in and lights are dimmed throughout the floors, making it feel comfy and warm during a cold afternoon. Although, the dim lights do make it hard to take an aesthetically pleasing picture which could be an issue if you’re looking to take nice pictures.

Café Kitsuné has a variety of popular dishes that they serve, although it is a café with a larger selection of drinks rather than food. The Japanese style sandwiches (sandos) are amongst the most popular dishes served, notably the Chicken Katsu & Egg Sando. They also serve breakfast (after 8:30am) and evening (after 5pm) special dishes as well, with the sandos only being available after 12pm.

For drinks they serve a range of beverages, ready for whatever mood you’re in. This could be your typical non-alcoholic beverage that is either hot or cold, such as: coffee, teas & infusions or cold pressed juices like orange & sea buckthorn and their speciality cold drinks like iced matcha latte or iced yuzu & honey. Although a café, they also serve alcohol such as sake, wine, beer and cocktails to name a few.

We began our Café Kitsuné tasting session by ordering the Egg and Chicken Katsu Sando which was served in a cute brown Café Kitsuné logo box. The sandwiches were served with the crusts cut out, and the slices were thick, holding the contents of the sando’s nicely together.

Just from the first glance of the egg sando, the sandwich looked soft and fluffy, with each slice coming with half a soft boiled egg inside as well. The eggs are served cold and flavourwise, the sando is quite standard and plain. The mayonnaise and egg were quite obviously the only components in the sandwich, but this wasn’t necessarily a bad thing; I enjoyed each bite due to the fullness. All in all, for the price (£7.00), even despite the lack of flavour, I wouldn’t say I was disappointed. You’re not only paying for the taste but the presentation of the sando itself. The next sando we got was the Chicken Katsu Sando and being an avid katsu curry fan, I was really looking forward to what the Chicken Katsu Sando is about. When I set my eyes on the sando, I saw what my life could have been after a single bite, I had very high hopes for it – could have opened my third eye. With all this excitement built up I went for my first bite. I then understood what the sandwich was about in its entirety. I found it very standard and potentially even a bit disappointing given the price tag that came along with it (£9.00). The sandwich bread was nice and spongy holding everything together and the chicken katsu was very thick and coated with a sweet sauce and iceberg lettuce on top. However, I expected the sandwich to be hot and freshly made, but it was apparent that that wasn’t the case. Since the sandwich wasn’t freshly prepared ,I found the breast dry and the combination of the bread with it did not help the situation – which could have been avoided if it was freshly made when ordered. Furthermore, there was not enough sauce provided for the amount of chicken and bread that came along with it. All in all, I found the sandwich standard and quite dry and I did not think the £9 price tag which accompanied it was appropriate.

The Tuna Tataki Niçoise Salad was probably the most expensive salad I’ve bought, listed for £14. Just from the price tag, I was interested to see what was so special about it. It was served in a medium-sized box, with a handful of greens, tomatoes, edamame and a few green olives as a base, alongside slices of tuna. It was the first time I’ve ever seen tuna which looked like that. I even questioned if it was meat instead due to the raw appearance of the tuna. Surprisingly however, the tuna was incredibly tender and very enjoyable to eat. The combination of the tuna tataki with the soy sauce went well. It was clear that they had tried to make up for the meagre tuna portion provided with a big base of greens, and I was quite disappointed with this. Regardless I would recommend it, just bear in mind you’ll be paying for a big chunk of edamame with only a bit of tuna on the side.

For our dessert, we ordered the Hazelnut, Banana & Yuzu Paris-Brest and the seasonal Mont Blanc (I’m not sure this is still being served at Café Kitsuné by the time this column is published). We’ll first start off with the Hazelnut, Banana and Yuzu Paris Brest, which is a type of French pâtisserie. I can tell you right off the bat, that it was my favourite dessert out of the two. The banana crème mousseline was sweet, but not too sweet and the taste of banana wasn’t overpowering either. The creme was carefully placed in between choux pastry topped off with golden hazelnuts and finally with icing sugar. The pastry wasn’t tough and crumbled nicely in my mouth, and the combination of the banana crème mousseline paired with the choux pastry went very well together. This would definitely go well with some tea that Café Kitsuné serves.

Our final dessert was Mont Blanc, which is named after the famous French mountain, due to the mountain-like shape of the dessert. The Mont Blanc is made from a chestnut outer layer with a crème and citrusy lemon core, nicely packed inside. The bottom layer was made out of biscuit, adding a nice change of texture. For the festive season, droplets of ‘snow’ made from meringue were placed over the Mont Blanc dessert. However in all honesty, the taste was underwhelming in comparison to the combination of flavours the Paris-Brest had. This is not to say that the dessert was bad, but as I didn’t know the dessert prior to ordering, I had a different idea of what it would taste like. Overall the taste was quite bland despite the citrusy core. The chestnut outer layer was decent on it’s own, so I definitely think it carried the dessert.

To summarise, I found the store to be very charming and pretty both inside and outside. However, the inside was quite small so coming in a group of 3-4, we were at the very limit of what a table can hold, with the most ideal number being 1-2. Besides the size of the store, the food there is interesting and is worth trying out – especially the Egg Sando and the Paris–Brest. If you feel like you want to order the other dishes we ate, please do, just know they weren’t my favourite and I personally wouldn’t order it again if I were to go. I hadn’t mentioned this unti; now but the service was poor and definitely needs to be improved. We waited too long for our order to not only be served but also taken. I would recommend just paying at the counter on the first floor rather than waiting for someone to collect your order, as you may be waiting a while. Don’t forget to check out the Pantechnicon store when you visit as they have very pretty and interesting items being sold which I won’t spoil for you!