bacon sarnies begin to take off in Sydney 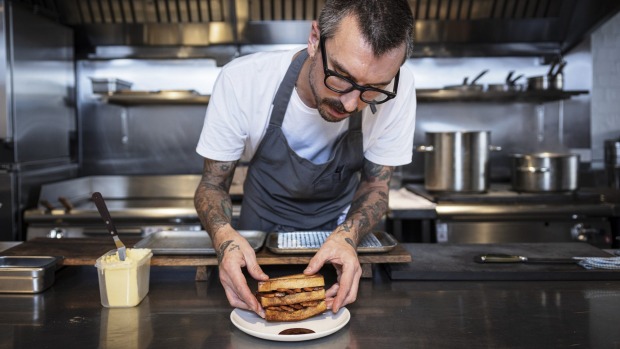 British expats, rejoice. After decades in the wilderness and a few false starts, it looks like the bacon sandwich is beginning to take off in Sydney.

The bacon sarnie (or “butty” if you’re in Northern England) has long been sidelined in Australia in favour of the bacon and egg roll despite massive popularity in the UK. English truck drivers scoff bacon sarnies by the side of the road; Prince Harry once ordered a plate load for a post-wedding party.

“Nothing is as good as a bacon sandwich,” writes Nigella Lawson in her first cookbook, How to Eat. “There are times when you just need to have that salty-sweet curl of seared flesh pressed between fat-softened, rind-stained spongy slices.”

Meanwhile, A.P House opened in Surry Hills last Thursday and its bacon sarnie was quick to become the venue’s most popular sandwich order, making up 90 per cent of all sangers sold last weekend.

“I guess it was from putting a picture of the sandwich on Instagram, but the next day every table ordered at least a couple, and pretty much everyone coming for takeaway picked one up too.”

A.P House is the cafe arm of All Purpose Bakery and its $14 crispy bacon sandwich is made on fermented potato bread with curry leaf butter, hot sauce and “lots of black pepper,” says Lindsay. “It’s just a flavour I really like.”

Get the latest news and updates emailed straight to your inbox.

“If Odd Culture is going to do something as simple as a bacon sandwich, it has to be as good as we can possibly make it,” says MacDonald, who spent time working at St John restaurant in London.

(St John’s Shoreditch outpost arguably serves the best bacon sandwich in the world, according to scholars on such vital matters.)

“Bacon sandwiches are something Jesse [Warkentin, Odd Culture’s head chef] and I really enjoyed during our time cooking and travelling through the UK,” says MacDonald. “When we got back to Australia it was quite hard to find a good one.”

Two new bacon sandwiches in one week may not seem like a significant trend, but for sarnie hunters this is a seismic shift, especially when the eateries involved are so high-profile.

Kitchen by Mike put a bacon butty on the menu a few years ago, but the sandwich is only available as part of the CBD eatery’s breakfast catering package.

Bacon sarnies occasionally pop-up at farmers’ markets and neighbourhood cafes too, but most expats have resorted to making their own or custom orders.

“Although we don’t list a bacon sandwich on the menu, before COVID came along we were selling loads to all the British backpackers staying at the hostel up the road,” says Frank Morsello, owner of The Spot cafe in Glebe.

“We’ve still got plenty of HP Sauce to make sarnies when all the backpackers return. Bacon on nice, fresh white bread with a bit of butter – you can’t go wrong.”

What constitutes a proper bacon sandwich almost always leads to fierce debate, but sarnie fans do agree on one thing: a real-deal butty is not just a “bacon and egg roll minus the egg”. The construction is way more complex than that.

This is not a time for sourdough. The fatty, crisp texture of bacon should be the star of the sandwich and sourdough is way too chewy. In his Return of the Naked Chef cookbook, Jamie Oliver recommends a fresh white loaf as it will nicely absorb the bacon’s fat.

Odd Culture’s James MacDonald takes things to another level by using a pillowy, white Japanese-style loaf and – traditionalists turn away now – adds a third slice to the middle of his sarnie which helps soften the bacon assault.

There’s really only two choices here: ketchup or tangy HP Sauce, the lifeblood of English breakfast. St John restaurant in London uses ketchup for its sharpness and sweetness to cut through the fat, but Nigella Lawson and Oliver prefer HP.

It’s a real “jam or cream first on a scone?” situation. Notably, MacDonald serves Odd Culture’s sarnie with Japanese Bull-Dog sauce, which is a lot like HP but a bit fruitier.

Everyone agrees you want to source the best dry-cured bacon you can, but the degree of crispiness is a personal preference. Streaky bacon is key (although a mix with short-cut is fine) as fat equals flavour.

Oliver doesn’t use butter – presumably because the sarnie is already fatty enough – however other chefs say the spread is important for lubricating the sandwich and making it easier to eat. It’s another personal choice, but if you do use butter, unsalted is best, unless you’re in training for the Hypertension Olympics.

Frank Morsello at The Spot says the split is pretty even between British customers requesting their bacon sarnie on toasted bread versus fresh. However, according to MacDonald, the best option is somewhere in between so the outside is lightly toasted for structural integrity while the inside soaks up the grease.

“At home, I cook the bacon under the grill in a lined tray,” says the chef. “Once the bacon is done, I throw the bread into the fat that remains in the tray and toast it under the grill. You only want it toasted a little bit on one side. I would never use a kitchen toaster for a bacon sandwich”.