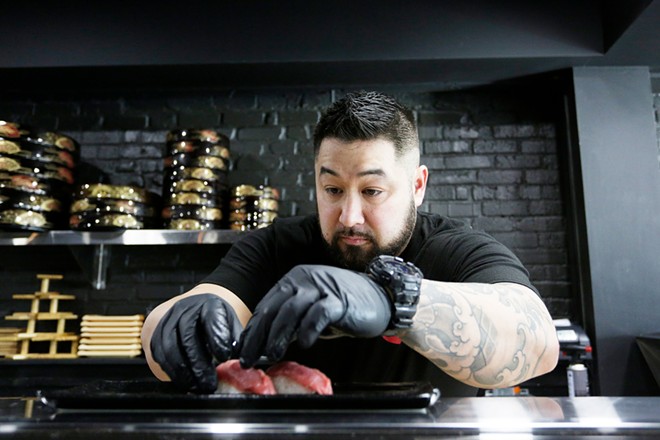 Talk about a déjà vu. When signs first appeared on a Lakeside Avenue building in November 2020 noting that Takara Japanese Cuisine & Sushi was “opening soon,” longtime Coeur d’Alene locals probably thought they were imagining things. After all, Takara closed in 2010 after an 18-year run when the restaurant’s founder, Ryuhei Tanaka, retired.

In that span, however, Tanaka delighted diners, many of whom were likely new to Japanese cuisine, which was much less prevalent in the Inland Northwest than it is today. Moreover, Tanaka trained and inspired several generations of young sushi chefs, including one of the new owners responsible for resurrecting the restaurant.

Kenta Nishimori was still in high school when he first worked at the original Takara, learning from and forming a lifelong bond with Tanaka, who retained ownership of the building after Takara closed. In fall of 2020, Tanaka reached out to him about starting a restaurant, says Nishimori, who’s worked at and helped develop Japanese restaurants throughout the region, including Wave Sushi Island Grill in Spokane and Syringa Japanese Café & Sushi Bar in Coeur d’Alene.

After delays that became the norm for many construction projects these past two years, on December 31, 2021, Nishimori, the restaurant’s executive chef and general manager; his wife, Shiree; and business partner Joshua Williams officially relaunched Takara.

“I don’t know for sure, but I think [Ryuhei Tanaka] wanted to know I was going to keep on the traditions,” says Nishimori, who describes Tanaka as a mentor and father figure.

“A lot of stuff we do here is original Takara,” he says, noting that he continues to revise the menu, especially as some ingredients have been difficult to procure.

On the modern side, Takara serves both American and Japanese wagyu beef. The Snake River ribeye ($68) is from southern Idaho, while the A5 ribeye ($145) — A5 indicates the highest quality designation — hails from Japan and is served with rice and sauteed romanesco broccoli.

Regardless of the origin or inspiration for the dish, says Nishimori, the emphasis is on the freshest ingredients and making everything from scratch. He makes his own tamago, or egg omelet, (versus purchasing pre-made) for one of 26 items on the nigiri/sashimi menu, which features mostly seafood.

“I want to focus on the fish,” says Nishimori, whose background includes seven years working with a Japanese seafood company teaching importers, exporters and chefs in Los Angeles about seafood.

Now he’s applying that expertise to Takara, so much so that he’s quickly gained a following of other restaurants and people of Japanese heritage who want to purchase seafood from him.

Many chefs will say they get fresh fish, but often it’s frozen and maybe even pre-cut into sections, says Nishimori, who figures he goes through roughly 300 pounds of fresh fish per week, all of it shipped directly to the restaurant.

Spanish bluefin tuna, for example, arrives in a 4-foot-long box that takes two of Nishimori’s sushi chefs to lug it into the open kitchen area. At roughly 100 pounds, it’s not even a quarter of the fish’s full weight. It takes Nishimori around an hour to break the fish down into suitable portions, including saku, or blocks, that can then be sliced into sashimi.

Alongside him, the other chefs spend the three hours between lunch and dinner service prepping mostly seafood, which is the focal point of Takara’s extensive sushi menu. 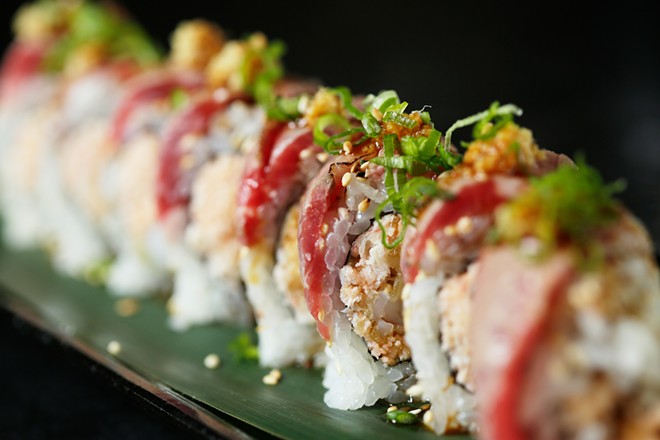 The Black Mamba roll, named after the late Kobe Bryant.

In addition to assortments chosen by the chef, also known as omakase ($19-$300), Takara serves traditional maki, or rolls ($5-$8), whereby the ingredients — like cooked beef, pickled radish and raw fish — are encased in sticky rice and seaweed.

More than three dozen variations of sushi rolls range from the more common spider roll with soft shell crab ($12) and Philadelphia roll with smoked salmon and cream cheese ($10) to ones that pay tribute to Nishimori’s life.

The Momji ($19), for example, honors Momiji Japanese Red Maple Restaurant, where Nishimori held his first job at age 14, before he worked at the original Takara. The Hachimura roll is a nod to Gonzaga University’s former basketball star Rui Hachimura, and includes snow crab tempura, yellowtail tuna and a coconut-based salsa ($19). The Black Mamba ($24), meanwhile, pays tribute to the late Kobe Bryant.

Nishimori’s gun-building hobby is reflected in the AR-15 roll ($18) with albacore, cream cheese, avocado and spicy elements like sriracha and Japanese seven spice. Takara also offers a 10 percent discount to customers in uniform or openly carrying a firearm.

There are also a handful of deep-fried rolls ($12-$14) on the menu, which cater more toward Americanized expectations of sushi, like the Las Vegas roll ($14) with spicy tuna, snow crab, cream cheese, avocado and eel sauce.

In addition to its menu, Takara blends traditional Japanese elements and more modern ones in the restaurant’s décor.

“My roots are from Osaka, so I wanted to bring that style,” says Nishimori, who explains how the black walls are an homage to a castle he remembers visiting while growing up in Japan.

Some of the ceramic dishware is from his wife, Shiree, an artist. She also made a stamp of the kanji symbol for takara, which means treasure, to embed into the new concrete and epoxy bar that wraps around the sushi counter area.

Diners have their choice of eating at the sushi bar, in the main dining room or in several tatami rooms. These provide semi-private eating areas with low-slung tables surrounded by benches, ideal for larger groups and a more leisurely meal. ♦